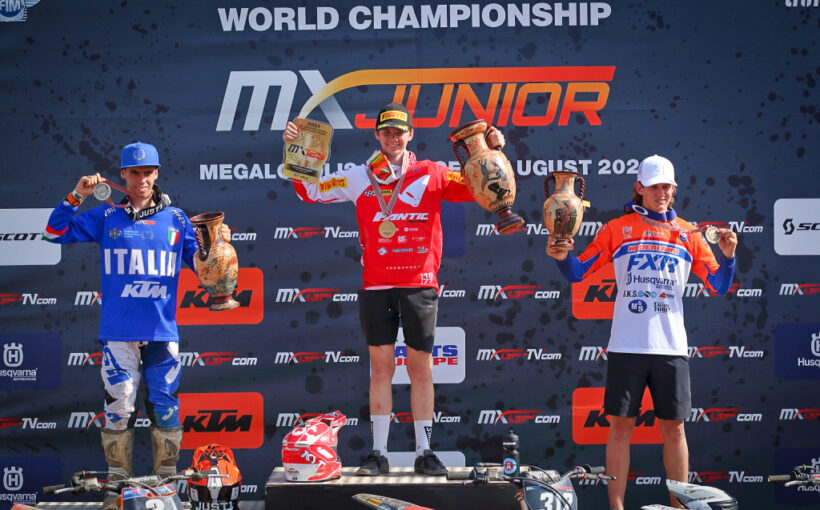 In the first 125cc race it was Bence Pergol who took the Fox Holeshot, though it was Osterhagen who took the lead in the first lap and then led the rest of the race until the chequered flag. Raul Sanchez made contact with a lapped rider in front of pitlane, while Gorgios Vagenas almost crashed but managed to stay in the game, though it cost him second position. Last year’s 85cc World Champion Valerio Lata of MRT Racing Team KTM finished the race second after making the most of the opportunity handed to him thanks to the mistake of Sanchez, who finished the race third.

In the second race it was Osterhagen who took the second Fox Holeshot, got his head down and controlled the rest of the race to go 1-1 and become this year’s 125cc Junior World Champion. While Osterhagen led, there was a nice battle between Kay Karssemakers and Lata for second, with the pair wheel-to-wheel for the entire race. Eventually though it was Lata who finished second with Karssemakers third.

125cc Junior World Champion, Haakon Osterhagen: „I won basically everything except one holeshot in the first race. After the first race, where I ran out of energy due to the heat, I decided to be ready for what would come and I did my best.  This is very great success for me and for my country. I would like to thank my family, my sponsors and everybody who supported me.“

In the 85cc category, Martins Janis Reisulis took the first Fox Holeshot of the day, as a couple of riders were involved in a crash out of the start. Reisulis led the whole race while coming under immense pressure from last year’s 65cc World Cup Winner, Marek Vitezslav who was pushing from behind. Unfortunately, on the very last lap Reisulis ran out of fuel which allowed Vitezslav to take the win. Noel Zanocz finished the race second ahead of Mattia Barbieri.

The second race saw Vitezslav take the Fox Holeshot and lead the race while coming under pressure from Barbieri. The Czech rider pushed hard until the last lap when he was passed by the Italian who made a risky move which ultimately paid off.

With a 3-1 result, Barbieri was declared the 85cc World Champion as he tied on points with Vitezslav who had a 1-3 result. Third was Zanocz who finished 2-5 in the races.

85cc Junior World Champion, Mattia Barbieri: „I’m happy to be here on the podium. It was a very good battle with Czech rider. I want to express my thanks to the whole Italian team, my sponsors, my family”.

The opening 65cc race saw Andrea Uccellini take the Fox Holeshot as he led the race and was looking comfortable in the lead, though with just two laps to go, the Italian was passed by Aaron Katona who was the race winner, Uccellini was second and Sleny Goyer was third.

With two race wins, Katona got the perfect score to that 65cc title, while Goyer finished second and Uccellini third.