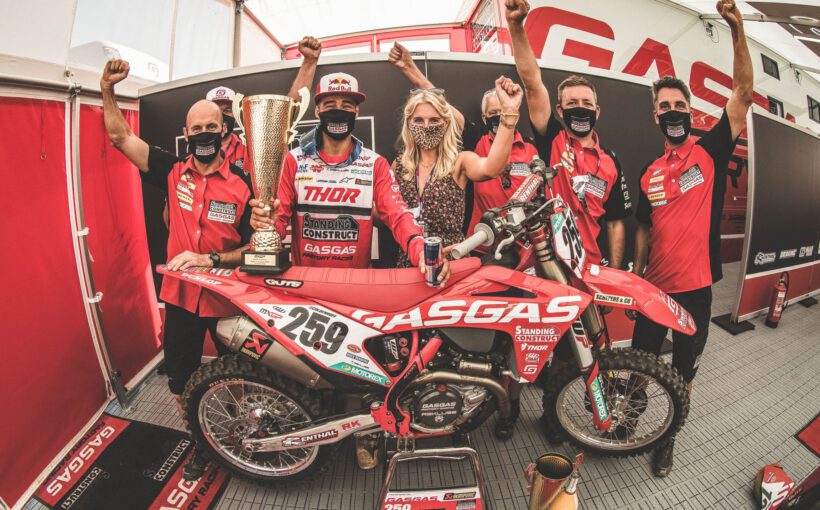 GASGAS FACTORY RACING FLIES TO VICTORY AT MXGP OF LATVIA!

GASGAS Factory Racing’s Glenn Coldenhoff has raced to overall victory at the MXGP of Latvia, securing a triumphant result at the grueling Kegums circuit to earn GASGAS Motorcycles their 1st ever FIM Motocross World Championship victory. A strong runner-up in the opening moto, Glenn then produced an impeccable ride in the 2nd MXGP race to claim overall victory. The 29-year-old’s near faultless performances move him up to 3rd place in the MXGP World Championship standings!

Glenn Coldenhoff was quick to get on the gas when the gate dropped for the opening MXGP moto in Latvia, the long-awaited restart of the 2020 FIM Motocross World Championship. Very nearly taking the holeshot, he raced in 2nd place during the early stages of the race before making a pass for the lead at the start of lap 3. The Dutchman then made an unfortunate mistake just before the halfway stage of the race and lost the lead, but was able to regroup and keep eventual race winner Tim Gajser in sight. Glenn crossed the finish line in a brilliant 2nd place, earning GASGAS’ their 1st MXGP podium result.

Moto 2 saw Coldenhoff claim the holeshot, as his MC 450F rocketed him to the head of the MXGP field early on the opening lap. Withstanding the pressure from multiple opponents while also setting the fastest lap time of the race, the Standing Construct GASGAS Factory Racing rider led all 17 laps to claim a historic race win and overall GP victory for GASGAS in MXGP competition.

Race 1 at the MXGP of Latvia was tough for Italian Ivo Monticelli. After rocketing down the start straight side by side with teammate Coldenhoff, a 2nd lap fall demoted him to 33rd place. In a courageous ride through the field, Monticelli reached the fringes of the point-scoring positions midway through the race before a big crash left his bike too damaged to continue.

Moto 2 saw Ivo meet a similar fate. A sizable crash in the 1st turn claimed many riders and Monticelli’s MC 450F was again damaged, leaving the luckless Italian to focus on round 4 this coming Wednesday.

Simon Langenfelder also had a challenging MXGP of Latvia. After being pushed wide and off the track on lap 2 of the opening MX2 race, the young German regrouped and moved towards the point-scoring positions before crashing twice and opting to focus on the 2nd race. In just his 3rd MX2 GP, a great start saw the young German race in the top 10 for half of the moto, before slipping back to 21st at the finish.

Glenn Coldenhoff:“What can I say? It’s been a great day! After qualifying we made some adjustments to my bike’s suspension and it really paid off in the races. The Standing Construct team have worked hard during lockdown to keep improving our bikes on the starts and it clearly showed today. I started 2nd in race 1, nearly had the holeshot and then I took the lead on the 3rd lap. After a few laps there was a big rock in the rut I was in, which I hit, and it knocked me off balance just before the waves section. I re-joined the race quickly and made another charge towards the end, but it was too late. I finished in 2nd place, which was really good after a not so great qualifying. Race 2, another great start taking the holeshot! It was a tough race though, especially during the final laps, but I’m really happy to have won for myself and the team, especially as it’s only the 3rd MXGP for GASGAS. It’s just awesome. It’s nice to be back in MXGP, I really like the 1-day format and I can’t wait for Wednesday.”

Ivo Monticelli:“It was great to be racing MXGP again but not the weekend I hoped for. In the 1st race I was going well, before having quite a big crash on the jump at the far end of the circuit. I was ok but my bike was too damaged to re-join the race. In race 2, I was involved in the 1st corner crash with many riders. When I was able to pick my bike up it was clear that it wasn’t possible to continue because of damage from the crash. It’s really difficult for me to accept, leaving races like this. However, we’re racing again on Wednesday, so I need to stay focused and get some points on the board for myself and the Standing Construct GASGAS team.”

Simon Langenfelder:“It was a tough day for me. In qualifying I couldn’t find my rhythm and qualified 18th so I was in the middle of the gate for the races. In the 1st race I got pushed wide in a corner and off the track. I regrouped and started to move forwards in that race, but then I had a couple more crashes, so I decided to focus on the 2nd race as I was so far behind. I got a great start in race 2 and ran 9th for a lot of the moto, then 10th for a few laps. Towards the end of the race I had some problems and ended the race 21st. For sure it’s not what I wanted but this is only my 3rd GP and I’m learning all the time. I’m looking forward to racing again on Wednesday.”

Both Standing Construct GASGAS Factory Racing and the DIGA Procross GASGAS Factory Juniors will return to action at round 4 of the FIM Motocross World Championship on August 12.