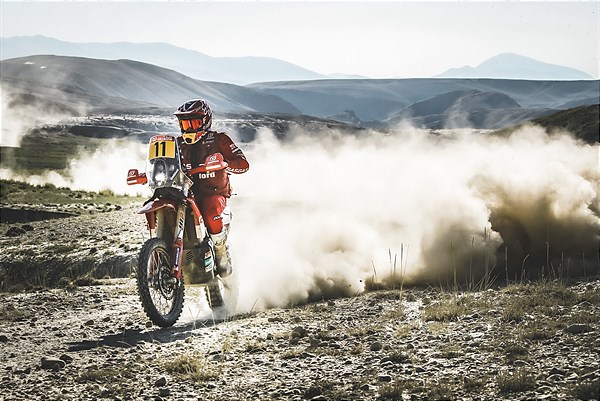 GASGAS Factory Racing’s Daniel Sanders has claimed his third stage win at the Silk Way Rally, topping the time sheets on the fifth and final day of the event. With three stage victories to his credit, Daniel enjoyed more stage wins than any other competitor and ends the rally in a strong fourth overall, just 53 seconds from a spot on the podium. Enjoying racing in Russia, Sanders got more race miles under his belt on our GASGAS RC 450F as he continues to develop as a top-flight rally racer.

Daniel Sanders:“I pushed really hard today to try and get onto the overall podium, but it wasn’t quite enough. I left everything out there and did everything I could to make time up on the riders ahead, but it was a short stage and there wasn’t much to separate us all today. I learned a lot this week, I felt great on the bike, and I know I have the speed so it’s all positive. When we get home from here my main focus will be on improving my navigation as this is where I feel I’m lacking a little bit. But overall, a pretty decent week for me and the team.”

The fifth and final day of racing at the Silk Way Rally saw riders line-up for a re-run of stage two, the very same stage that Daniel claimed victory on just three days ago. Entering the stage with the sole focus of making up time, Sanders was never headed as he reached each waypoint as the fastest rider, taking his third stage win from five starts at the shortened event. With two rounds of the FIM Cross-Country Rallies World Championship now complete, Daniel moves up to third in the provisional standings.

Following a very successful time in Russia, Daniel, and the rest of the GASGAS Factory Racing team, will now enjoy a few days of well-earned rest before turning their attention to the Rallye du Maroc in October.

Jordi Viladoms – GASGAS Rally Team Manager:“For Daniel, his impressive progress continued at the Silk Way Rally. For sure it was a pity for him to miss out on the overall podium, but there have been many highlights this week especially with his three stage wins. He also opened a stage which isn’t an easy thing to do. He rode very well on each stage and his potential is still very clear. Daniel was disappointed to just miss out on the podium and he knows what he needs to work on, so for the next race I’m confident that we will see him running up front once again.”