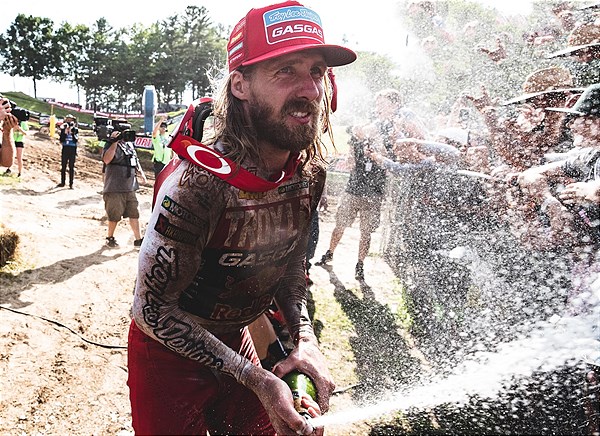 MOSIMAN AND BROWN CAPTURE TOP-10 FINISHES IN THE 250MX CLASS.

Troy Lee Designs/Red Bull/GASGAS Factory Racing’s Justin Barcia enjoyed his first overall-podium of the season on Saturday in front of a roaring hometown crowd at The Wick 338 National in Massachusetts. Claiming third overall with a pair of hard-fought 2-4 finishes in the brutal, sandy conditions, Barcia once again gave GASGAS Factory Racing another milestone to celebrate with the MC 450F.

As a New York native, Barcia felt good heading into the northeastern round and his ambition showed right away in Moto 1 as he shot off the line to capture a third-place start aboard his MC 450F. He quickly moved into second on lap one and battled intently behind the leader early on. Coming close in the first half of the race, Barcia eventually backed it down to claim a comfortable second in Moto 1.

In Moto 2, he got off to a slower start but he worked his way from ninth on the opening lap into a top-five battle midway through the race. He chipped away in the last 10 minutes to break into fifth and then set himself up to make a sweeping pass for fourth with three laps remaining, ultimately securing fourth in the moto.

Justin Barcia:“The fans kept me on my toes today, it made that charge through the pack feel way better in the second moto. We’ve been working extremely hard and things have been a little bit tough, but today feels amazing! I can’t thank the crew enough, they’ve been awesome and the setting we have here will work good in Millville, so let’s keep the ball rolling!”

In Moto 1, Mosiman got off to a third-place start and he quickly worked his way up to second and positioned himself within striking distance of the leader early on. The race leader went down on lap five, gifting Mosiman the top spot and he ran with it. After leading five solid laps, Mosiman found himself on the ground and eventually dropped back to ultimately finish seventh.

In Moto 2, he started off in eighth on the opening lap and charged his way up to sixth by the midway point. He had a small crash that set him back later in the race but he held strong to salvage another seventh-place finish, giving him seventh overall for the day with consistent 7-7 scores.

Michael Mosiman:“Today was a very tough day with a lot of highs and a lot of lows. I led some laps and I felt good on the bike but I think there’s some stuff we can improve on. I’m still getting my legs under me after being out for a couple races and I’m still coming back from that, but I think this is really good to build on. I’m glad to be healthy and ready for Millville, one of my favorite races.”   Teammate Pierce Brown had a tough start to Moto 1 as he came through the opening lap mid-pack. With his work cut out for him, Brown worked his way through the field from 19th to capture a 13th-place finish in the first race.

In Moto 2, Brown began in 12th and he rallied through the entire race to claim a top-10 finish, rounding out the day with 10th overall.

Pierce Brown:“All-in-all, I can’t be mad because I left it all on the track. This was my first time at Southwick and it was learning experience, and that’s all I can ask for. That’s really what I’m shooting for this whole season, I just want to make it race-to-race and get better. I feel like we are chipping away, quietly, but we really need starts bad. Hopefully we can get upfront at Millville next weekend.”