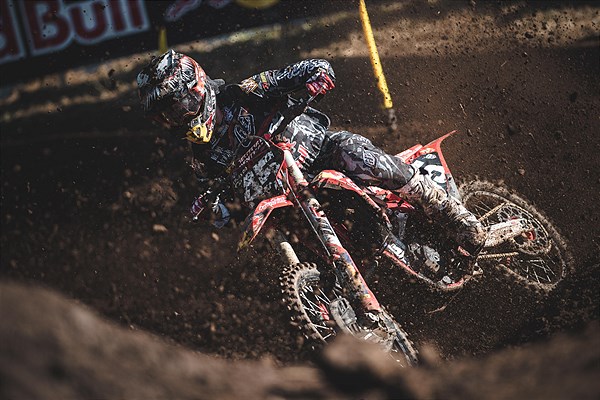 PIERCE BROWN ON THE GAS FOR A CAREER-BEST FIFTH AT WASHOUGAL.

BARCIA ROUNDS OUT THE TOP-FIVE IN 450MX CLASS.

Riding the wave of an exciting and successful stretch for the Troy Lee Designs/Red Bull/GASGAS Factory Racing Team, 250MX rider Pierce Brown delivered a career-best performance on Saturday with an impressive fifth-overall at the Washougal National. Alongside Brown’s paramount 6-4 moto scores, teammate Michael Mosiman battled up front with 4-7 finishes to claim sixth overall. In the 450MX class, Justin Barcia also captured a top-five overall with a solid pair of 4-7 finishes at the seventh round.

In his first appearance at Washougal, Brown used the qualifying sessions to get familiar with the demanding terrain, qualifying 11th overall. In Moto 1, he nailed the start aboard his MC 250F and mixed it up inside the top three for a few laps early on. Shuffling a few spots back later in the race, Brown secured a solid sixth in the first moto.

In Moto 2, he didn’t get the best jump off the start but he made early moves to get into the top-five and that’s when he ignited the charge that would bring him into podium contention halfway into the moto. He kept a good pace while battling with the front-runners, hammering his way to a fourth-place finish.

Pierce Brown:“This is my first visit here and it went really well, I’m stoked! I loved the track all day long and I was really happy with the whole day. First moto, I ended up sixth but it was a big improvement from how the last couple rounds have gone so I just used that to fuel the fire for the second moto. In the first couple laps, I was up there in the mix with all the boys so that was cool. It was my best moto finish and best overall yet, so I’m going to use these next couple weeks off to keep the momentum going.”

It was a quietly consistent day for Michael Mosiman, who came into the weekend fresh off a podium finish at the last round. He put himself into a positive position off the start of Moto 1, battling in fifth for the first 10 laps. He overtook fourth later in the race and held steady for a top-four finish.

In Moto 2, he found himself outside the top-10 on lap one. He put on an early charge to get up to ninth but a mistake caused him to hit the reset button and make another climb from 15th. He managed another bold charge late in the race, picking off one last rider on the final lap to secure seventh in the moto. With 4-7 finishes, Mosiman came away with sixth overall on the day.

Michael Mosiman:“It was a tough day, not how we wanted it to go, but I had a lot of fun and the fans were stoked! I love coming to Washougal and I felt pretty dang good all day. I think I lost the race today on the first lap in both motos, so I just got to work on that and I think we’ll be in good shape. We’ve got a couple weeks off to rest the body and hit it hard for the last five rounds.”

In the 450MX class, Justin Barcia came away from Washougal with a host of positives including a season-best qualifying position of fifth earlier in the day. The Round 6 winner positioned his MC 450F inside the top-six off the start and he spent the entire moto chasing after the lead pack. Making his way just outside the podium battle, Barcia finished within striking distance in fourth. His Moto 2 start was a little further back but he didn’t hesitate to get on the gas early on and battle his way back into contention. Finishing strong in seventh, Barcia came away fifth overall with 4-7 moto scores.

Justin Barcia:“I’m stoked on the qualifying time of P5! I didn’t get the best starts but I charged as hard as I could and felt like I rode solid. No excuses but it was a difficult track to make passes and ending fifth overall – to me – that’s a really bad week, so I’ll take it. We’ve got two weeks off to regroup and come out swinging for the last five. I’m ready to hammer down!”