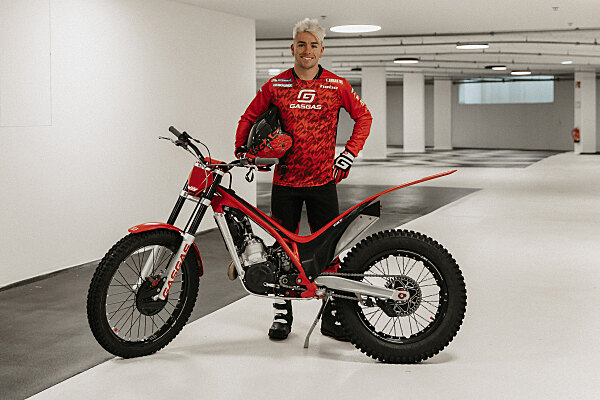 Welcome to GASGAS Factory Racing Jaime Busto! GASGAS is super pleased to announce that 2022 TrialGP runner-up Jaime Busto will join the squad for at least two years and compete in both the indoor and outdoor world championships, as well as his own Spanish national championship and selected other events.

2023 is looking good for the GASGAS Factory Racing trial team! As part of the ongoing strengthening of the team, we’ve signed the highly skilled and flamboyant Spaniard Jaime Busto. The 24-year-old has already enjoyed a massively successful career, having claimed both Youth and Junior titles in his national Spanish championship, and an FIM Junior World Championship in 2014.

Over the past six seasons in the TrialGP World Championship, Jaime has finished inside the top three no less than four times, as well as claiming four overall top-three championship results in the intense X-Trial indoor series. Completing the 2022 TrialGP season as runner-up, the wild Spaniard is looking to go one better in 2023 and sees GASGAS as the team to make it happen! Jaime will start his contract with the team from December 1, 2022.

Jaime Busto:“I’m so excited to join GASGAS for next season. It’s a brand with Spanish heritage and that’s really important, but also the whole structure and dynamic of the team looks really strong. The bike itself is great and I know the plan is to keep on developing and improving all the time. For 2023, my goal is to improve on my results from this year. I want to be more consistent and in the fight for the win at every single race. The whole GASGAS vibe fits my style really well, and I’m hoping that by working hard together we can achieve some greats results next year.”

Albert Cabestany, GASGAS Factory Racing Trial Team Manager:“It means so much to sign a rider like Jaime Busto to the team. Obviously, he is capable of securing top results and so our plan is to give him everything he needs to do that. But Jaime also fits the GASGAS brand perfectly, and together I truly believe we can achieve great things. His results in 2022 have been excellent – third overall in X-Trial and second in TrialGP – and so looking ahead to the next two seasons, our plan is to keep on growing the team structure to be even stronger and enable Jaime to continue fighting for world championship titles. Jaime joining the team is just one part of a big plan to put GASGAS right at the top of the trial world, and I can’t wait for the new season to begin.”