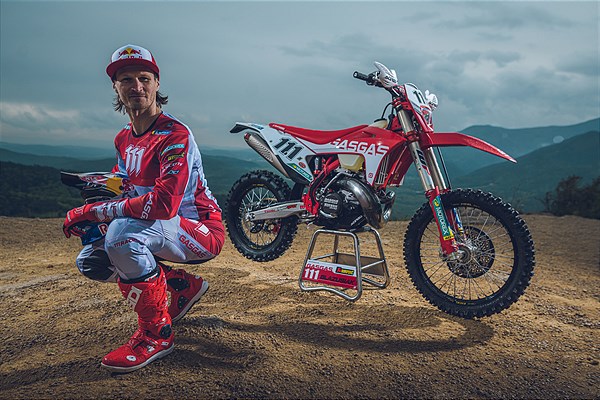 We’re going enduro racing, and with Taddy Blazusiak in control things are looking good as we take on the first ever running of the FIM Hard Enduro World Championship. Leading GASGAS Factory Racing into the eight-round series, Taddy is more motivated than ever to make his mark on the extreme enduro scene once again and hopefully come away with another world title.

We’re proud to have a rider of Taddy’s stature leading our first assault into the FIM Hard Enduro World Championship. As a six-time FIM SuperEnduro World Champion, five-time AMA EnduroCross Champion, and five-time Red Bull Erzbergrodeo winner he’s a rider synonymous with the very toughest events the sport of enduro has to offer. And with the creation of the new hard-enduro-only FIM championship we know we have one of the best in the business to represent the brand.

The FIM Hard Enduro World Championship will feature eight rounds in eight different countries, including a trip across the Atlantic to Tennessee, USA for the Red Bull TKO. First however, eyes will be on Portugal for round one and Extreme XL Lagares. While the race won’t feature any spectators unfortunately, it will still deliver some of the toughest terrain over the course of the three-day event.

Competing alongside Taddy as a GASGAS Factory Supported junior rider, up-and-coming Austrian racer Michael Walkner will also be looking for success on his EC 300. Focused on gaining as much experience as possible from his teammate, while fighting him for the podium places, the 23-year-old is super-excited to start his 2021 campaign, and eager to show what he can do!

Taddy and Michael’s first FIM Hard Enduro World Championship event will be Extreme XL Lagares, in Portugal, on May 7-9.

Taddy Blazusiak:“I am so excited – 2021 is looking to be a great year. I think the new FIM Hard Enduro World Championship is something I, and a number of the other extreme riders, have been looking forward to for a long time, and I’m really looking forward to seeing how things turn out. With the SuperEnduro Championship postponed, my training has turned back to the longer rides and more extreme terrain that we’re likely to see at this year’s Hard Enduro World Championship. I have switched back to the 2-stroke too, to get back up to speed on that. It’s been good, I’m really looking forward to finally getting some racing done, so I’ve been prepping myself, prepping the camper, getting everything ready for the season. It’s going to be a good one!”