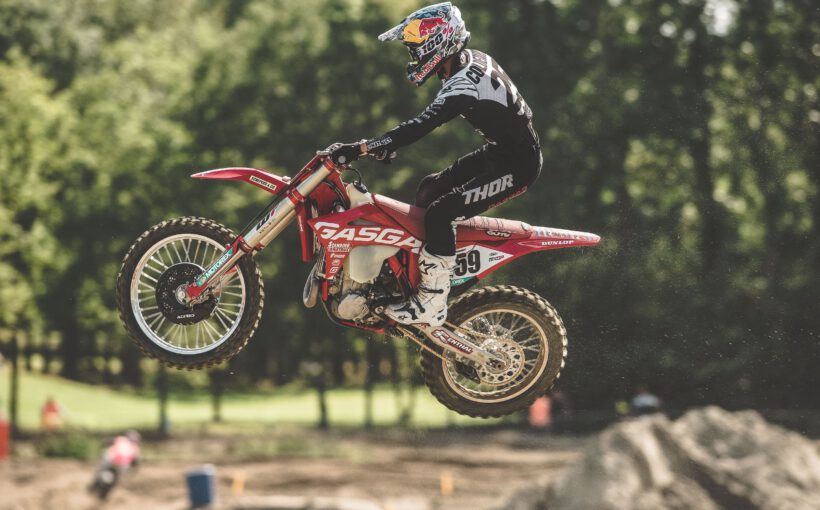 GASGAS Factory Racing have continued their MXGP World Championship preparations with another rewarding day’s racing in the Netherlands. Lining up at the second Dutch International, held at the sandy circuit of Axel, the team delivered positive results with Standing Construct’s Glenn Coldenhoff claiming the third step of the overall MX1 podium. Teammate Ivo Monticelli enjoyed his own success, racing comfortably among some of the MXGP elite at the head of the field in race one, placing fifth and securing ninth place overall.

Arriving in Axel for the second and final Dutch International to be held prior to the restart of the MXGP World Championship, Glenn Coldenhoff looked to continue his recent success after taking victory last weekend in Arnhem. Racing in sixth place for much of the opening moto, the Dutchman took his time before disposing of Benoit Paturel with two laps to go. Coldenhoff then went on to make a last-lap pass on teammate Ivo Monticelli when the Italian became held up by a lapped rider. Coldenhoff claimed fourth as the checkered flag fell.

Coldenhoff went on to claim a great start in race two, rounding the first corner in third place before shadowing early race leader Romain Febvre well into the second half of the race. The 29-year-old then unfortunately clashed with a lapped rider while setting up a pass for the lead and fell. Remounting quickly, Glenn crossed the finish line in fourth place, enough to secure the final step of the overall podium.

Ivo Monticelli continued his return from injury with a strong fifth-place finish in race one. Following a great start that saw the Italian lead a four-rider battle for fourth place during the first half of the moto, he maintained his position and kept third place in sight as the laps wound down. Monticelli was then unfortunate to be held up by a back marker on the final lap, gifting fourth position to teammate Glenn Coldenhoff. Ivo ultimately crossed the finish line in fifth place, setting himself up for a strong second moto.

Race two saw Ivo Monticelli make a great start as he utilized the full power of his MC 450F, emerging from the opening corner in second place. Riding with a little too much aggression, the 25-year-old crashed twice during the early stages of the 30-minute race. Finding his rhythm as the race reached half distance, Ivo held strong and crossed the finish line in 11th place.

It was a tough day for GASGAS Factory Racing’s MX2 class rider Simon Langenfelder in Axel. The 16-year-old qualified in a strong sixth place before racing comfortably in fourth position for much of the opening moto. Frustratingly, a big crash at the halfway stage of the race ended the German’s day early. Despite the heavy fall, Langenfelder was unscathed and opted to skip race two and concentrate on Latvia next week, his return to MX2 World Championship competition.

Glenn Coldenhoff:“Overall, I’m happy with today. Qualifying was really close with everyone and I qualified fifth so that was ok. I felt great ahead of the first race, taking the holeshot but then the race was red flagged. On the restart my start was not so good, around 10th place. I was quickly up to sixth, however the track was quite smooth and one lined, so it was hard to make passes. I knew my fitness was good so I passed Benoit Paturel with two laps to go, then Monticelli got caught up with a back marker so I passed him and finished fourth. Race two I had another good start in third place. I moved into second place quickly and stayed there for most of the race. I was setting up the pass for the lead when I came together with a lapped rider. I dropped back to fourth and took a couple of laps to find my rhythm again. When I did I closed in on third place but by then the race was over. I’m really happy with my MC 450F, we made some small suspension changes for today and they worked, my speed and fitness are good so I’m really looking forward to next weekend in Latvia.”

Ivo Monticelli:“It was a good day for me. Qualifying went well and I had sixth gate pick for the races, so I was happy with this. Race one I had a great start and settled into fourth place straight away. I was really happy to be up front, keeping the leading riders in sight and race in clean air. Unfortunately, on the last lap I was held up by a lapped rider, which let Glenn pass me. But I ended the race in fifth, which is still a great result. Race two started really good, starting second, right behind Romain Febvre. I was a little too aggressive, making a mistake and dropping back to seventh. I then crashed twice all on my own and finished the race in 11th. Not the best result but these two Dutch races in the sand were great preparation for Latvia next week. I felt great on the bike so I’m in a good place.”

Simon Langenfelder:“I had a good day going, qualifying sixth this morning. In race one I had a good start and I was running third for the opening lap. I briefly moved up to second before moving back to fourth. I was running a comfortable pace for most of the race and then I unfortunately had a big crash, going over the handlebars and the bike landed on me. I am ok, a little sore. Myself and the team decided against lining up for race two. I’m healthy, my speed is good, and we will now focus on Latvia next week.”

Both Standing Construct GASGAS Factory Racing and the DIGA Procross GASGAS Factory Juniors will line up next weekend for the MXGP of Latvia, the return of the 2020 FIM World Motocross Championship on August 9.