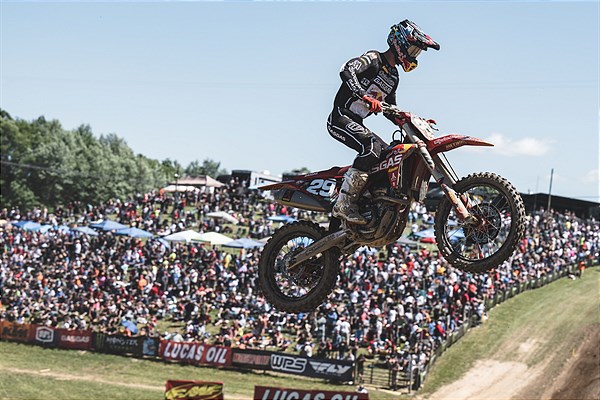 The Troy Lee Designs/Red Bull/GASGAS Factory Racing Team was on the cusp of another podium breakthrough at Round 4 of the 2022 AMA Pro Motocross Championship with more strong performances from Michael Mosiman in the 250MX class and Justin Barcia in 450MX. After leading solid laps in the first moto, Mosiman had a glimpse of victory within his grasp but a couple of small mistakes kept him just off the overall podium in fourth. Finishing a season-best fourth in Moto 1, Barcia had a strong start to the day and he’s fired up to continue besting his own performances this season!

Mosiman grabbed a top-five start in the first moto, clicking off the first few laps to make his way into the lead on lap six. He held on for a few laps before he went down on the inside of the finish line turn. Re-mounting in third, he fought hard in the final laps to ultimately come away with fourth. In Moto 2, he grabbed a top-10 start and passed up to sixth halfway into the race. Hungry for a top-five, Mosiman slid into fifth late in the race before making another push to overtake fourth with a couple laps to go. With 5-4 moto finishes, Mosiman scored another fourth overall in the class.

Michael Mosiman: “Today was a day of mixed emotions! This track is extremely technical and tough and I think it really fell into a lot of my strengths. I’m proud of where the bike was at and just my riding and speed. It’s a really cool feeling to pass for the lead in the first moto! I was able to make up some really good ground, make good clean passes and that’s a feeling I’m going to remember and replay over in my head and look to repeat throughout the season. I made some mistakes, too, and I’m really going to work on staying engaged and focusing on solutions to put together a solid 35 minutes out there.”

It was a progressive top-10 day in the 250MX class for teammate Pierce Brown. He got a 12th-place start in Moto 1 and made a few quick passes to get up to ninth early on. He fought inside the top-10 battle for the rest of the race, maintaining his 10th-place position through the checkers. In Moto 2, Brown got off the line just outside the top-five and he battled up front for the first few laps. Racing in the thick of a multi-rider battle, Brown ultimately settled into 10th for the rest of the race. With consistent scores, Brown came away with ninth overall at Round 4.

Pierce Brown:“I had just a tough day all-around. I had some decent starts and I was up there in the fight for a little bit but I just struggled today and couldn’t put it all together. I ended up ninth overall, a step forward from last week, so that’s a positive. We’ve been trending in the right direction results-wise from Hangtown until now but still nowhere near where I should be, or where I want to be, so we’re going to do some work during the off-week and be ready for RedBud.”

In the 450 class, Justin Barcia continues to make strides toward the front with a season-best performance at Round 4! He charged right into the first moto of the day, placing his MC 450F into third on the opening lap. He raced up front for the first few laps before establishing himself in the top-five battle. Making a late-race climb, Barcia grabbed another spot to score his best moto-finish of the year in fourth. In Moto 2, he grabbed another top-five start but he wasn’t able to put in a forward charge this time around, bringing it in for seventh. Putting together 4-7 moto results, Barcia captured his best overall finish in sixth.

Justin Barcia:“We’re taking steps in the right direction. I had a pretty good practice and had some great starts in my motos. The first moto was really good, I charged hard and ended up fourth. The second moto was a little bit of a let-down for me. I felt really good, the bike setup was really good, but I just over-rode a little bit. The track was really gnarly but all-in-all, a lot of positives. I’m really looking forward to this off-week to catch up on some motos and just keep working on things so I can send it into RedBud!”

The crew will enjoy a weekend off from racing before jumping back into action with the RedBud National on July 2 for Round 5 of the 2022 AMA Pro Motocross Championship.

Championship Standings – After Round 4 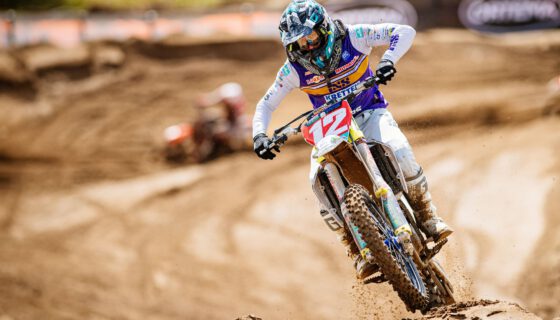