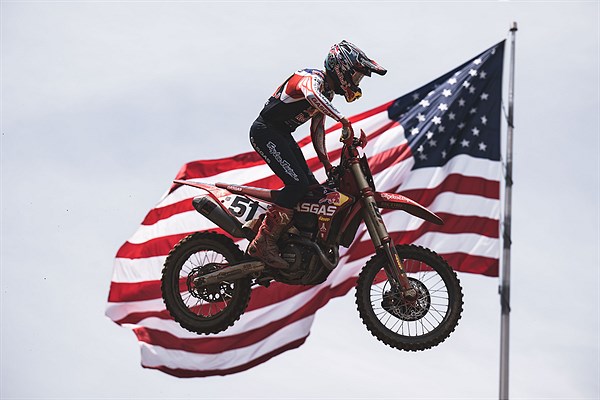 BARCIA GETS IT DONE WITH A PODIUM FINISH AT REDBUD!

MOSIMAN HUNGRY FOR MORE AFTER TOP-10 OA AT ROUND 5.

With a massive crowd on-hand for America’s Independence Day weekend, Justin Barcia and the Troy Lee Designs/Red Bull/GASGAS Factory Racing Team celebrated their first 450MX podium of the season with third overall at the one and only RedBud National! For Barcia, stoke levels were at an all-time high during Moto 2 as he grabbed a serious holeshot and raced his MC 450F to a season-best result of third, smoothing out his 8-3 scores for an overall podium at Round 5.

When it comes to fun, nobody does it like the folks at RedBud MX! Despite a challenging practice and qualifying session, Barcia was all smiles as he lined up for the first moto of the day. He got off to a great start in Moto 1, battling just outside the podium for the first few laps. While making moves early on, he got caught up in a big crash that left his bars tweaked for the rest of the race and he did his best to push through for eighth.

Lining up for Moto 2, it was clear that Barcia was settling for nothing less than the holeshot as he rounded the first turn out front aboard his MC 450F. Leading the first lap with screaming RedBud MX fans lined up and down the fences, Barcia remained in the mix up front as he settled into third early on. From there, he remained steady inside the top-three to secure his first moto-podium of the season in third.

Justin Barcia:“It was quite a wild day but a great day to be on the podium, it’s been a while and much-needed. Qualifying wasn’t ideal but mentally I knew I could go fast and the boys made some great changes to the bike. First moto, I was running really well and had a big crash that bent my bars, so I just managed to bring it in for eighth, which isn’t ideal but I rode really well. Second moto, I got a great holeshot and battled with the boys, ending up P3 for third overall. It was a wild – but awesome – day!”

In the 250MX class, Michael Mosiman came into the weekend hungry to put his MC 250F back into the center of the podium. With a top-10 start in the first moto, he put himself in position to make an early charge toward the top-five, and for the first half of racing he sat just outside in sixth. Breaking into fifth on lap 10, Mosiman held strong for a few laps before a costly mistake dropped him back to a sixth-place finish.

In the second moto, Mosiman found himself back in ninth off the start and he went to work right away to climb through the pack. Unfortunately, he went down again in the early laps and spent the rest of the moto playing catch-up, finishing 10th in the moto and eighth overall.

Michael Mosiman: “It was a tough day on a number of different levels. Just before the sight lap in Moto 1, I tried a new goo product and I ended up throwing up everything I ate right before the sight lap, so that was not an ideal start. Off the start, I was making some good moves, keeping pace with the leaders – and catching them a little bit – but I made a mistake and went down. I regrouped and then unfortunately had some bike issues in the latter half of the moto. In the second moto, it was basically the same story. Really frustrating day – I’m looking for more, expecting more and disappointed – but I’m looking forward to Southwick.”

Pierce Brown came into the race weekend at less than 100% with a previously-tweaked knee, but he put his head down and rallied through in Moto 1. He came out strong with a seventh-place start, battling for a top-10 spot through the first half of the race but he took an unlucky digger midway through after a rock got stuck in his chain on the face of a jump, and he was unable to finish the moto due to wrist pain. Saddling up for Moto 2, Brown made a brave attempt at turning some laps but he wasn’t able to hold on for more than a few laps. Banged up and bruised, Brown looks forward to healing up this week and getting back on the gas next weekend at Southwick.

Pierce Brown:“I struggled pretty bad coming into the weekend. I had a messed up knee and I wasn’t sure if I was going to be able to race but I got through that. Halfway through the first moto, I got a rock stuck in my chain on the face of the jump and I took a pretty big digger, banging up my wrist. I tried to go out there for the second moto and was riding alright but I just couldn’t hold on because of my wrist in the first moto, so I had to pull out. Not the day we wanted but we’re going to rest up and come back at Southwick.”

The 2022 AMA Pro Motocross Championship is back in full swing with Round 6 taking place next Saturday, July 9 in Southwick, Massachusetts.