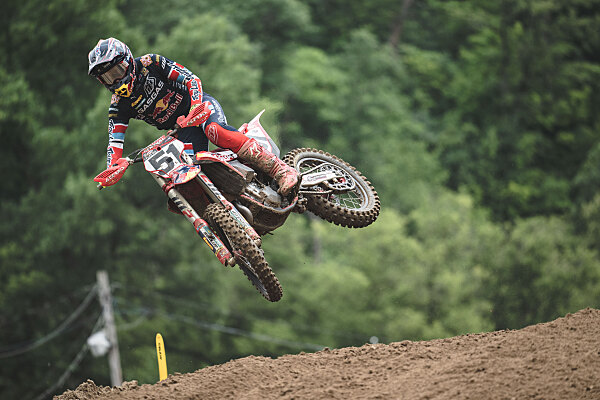 BARCIA BACK IN THE MIX WITH SIXTH OVERALL AT SPRING CREEK NATIONAL.

Troy Lee Designs/Red Bull/GASGAS Factory Racing’s Justin Barcia stepped into his mid-season stride today with a strong performance at the Spring Creek National in Millville, Minnesota. Commanding 6-5 moto finishes, Barcia got back into the mix up front in the 450 class with sixth overall at Round 7 of the 2022 AMA Pro Motocross Championship.

In the first 450 moto, Barcia grabbed a solid start up front aboard his MC 450F and he battled in sixth all race long. Keeping it consistent over the 16-lap race, Barcia locked in sixth in the race. In Moto 2, he got a seventh-place start and quickly climbed into the sixth spot. Laying the pressure on thick, Barcia rallied into fifth midway through and he continued his charge full steam ahead. Finishing only five seconds away from fourth, Barcia rounded out the day with a solid top-five finish in the second moto.

Justin Barcia:“It was a more positive day for sure, but the results obviously don’t show the progress we’ve made. I had two pretty good starts but I felt more comfortable second moto because we made a change before it. I made a little mistake at the beginning of the race and then just charged to fifth the whole moto, finishing just off fourth with third right in front of me. All-in-all, it was definitely a positive day – we had some good bike changes and felt more comfortable at the end of the day. I’m really looking forward to Washougal to get back on the podium!”

In the 250MX class, Pierce Brown found himself back in 14th off the start of Moto 1 and he made some moves early on to get up to 12th. Making a mid-race charge, Brown came close to breaking into the top-10 but he ultimately finished 12th in the race. In Moto 2, he had a better jump off the line as he rounded the first lap in 10th. Shuffling around the top-10 for most of the race, Brown put in a late-race charge to finish off the day strong with ninth in the moto and ninth overall.

Pierce Brown:“It was a mediocre day for me, still not where we want to be. I just need to be better off the start and be up there in the mix with the guys. We have five rounds to go, so that’s five more opportunities to get up there again. I’m really excited to go to Washougal, it’s one of my favorite tracks on the circuit!”

It was a tough break for team rider Michael Mosiman, who suffered a race-ending crash early in the first moto. Mosiman was able to walk himself off the track but didn’t line up for the second moto for precautionary reasons.

The 2022 AMA Pro Motocross Championship will head west to Washougal, Washington for Round 8 of the series next Saturday, July 23.

Championship Standings – After Round 7