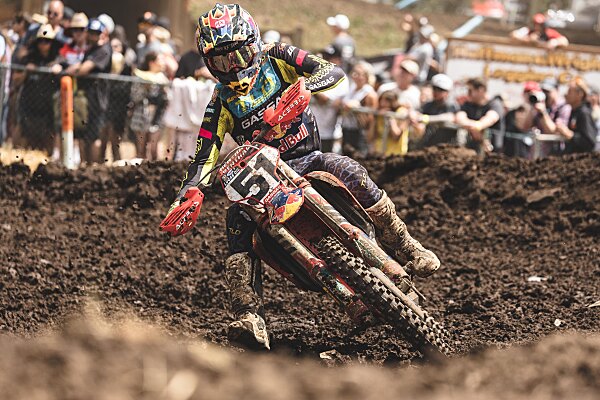 POSITIVE TAKEAWAYS FOR BARCIA AND BROWN AT THE WASHOUGAL NATIONAL.

GASGAS FACTORY RACING TEAM WILL ENJOY TWO WEEKS OFF BEFORE GETTING ON THE GAS FOR THE LAST FOUR ROUNDS.

It was a hard-fought day of racing for Troy Lee Designs/Red Bull/GASGAS Factory Racing’s Justin Barcia, who never stopped rallying through the gnarly conditions of Washougal to secure sixth overall with 5-8 moto scores in the 450MX class. Teammate Pierce Brown delivered his season-best performance of the 2022 AMA Pro Motocross Championship, claiming a strong sixth in the first 250MX moto of the day.

In the first 450 moto, Barcia found himself shuffled back to 14th off the start and he quickly made moves to get up to seventh. It wasn’t long before he was in top-five contention and he fought for a few hard laps to eventually overtake fifth. With his MC 450F still in beast mode, Barcia pushed himself late in the race to finish only a few seconds off the podium in fifth. In the second moto, he got a seventh-place start and struggled to find momentum in the first half of the race, causing him to fall back as far as 12th midway through. Digging deep, Barcia bounced back late in the race to secure eighth in the moto and sixth overall for the day.

Justin Barcia:“First moto, I had a really hard charge! I didn’t get off to the greatest of starts and I came from about 14th up to fifth. I had a really good battle the whole moto, it was pretty intense. Second moto, I got off to a decent start and just couldn’t find my groove – I just felt a little bit uncomfortable with the bike. We’re going to get after it during these off-weekends and try to find a little bit more for the final rounds. My goal is to get up on that podium and battle for wins, so it’s back to work!”

In the 250MX class, Pierce Brown had a great charge off the line to put his MC 250F into sixth on the first lap. Smooth and steady, Brown held onto that spot to finish only a couple seconds outside the top-five. In the second moto, he grabbed a top-10 start and made quick moves up to seventh. Racing there for the first half of the moto, Brown ended up getting shuffled back a couple spots late in the race, finishing ninth. With combined moto scores of 6-9, he captured eighth overall in Washington.

Pierce Brown:“We’re definitely treading in the right direction. We had a good first moto in sixth. Second moto, I got a good start and got caught behind some guys on the first lap and I ended up getting passed by a couple people. I fought through the pack as much as I could, I just didn’t have it at the end of the moto and I got passed by a couple more guys for ninth. We’re getting better, but we want more!”

Teammate Michael Mosiman was sidelined for Round 8 as he continues to heal up from a crash that took place last weekend at Spring Creek.

The 2022 AMA Pro Motocross Championship will take a two-week break before returning for the final four rounds of the series. Next up is the Unadilla National, taking place August 13 in New Berlin, New York.