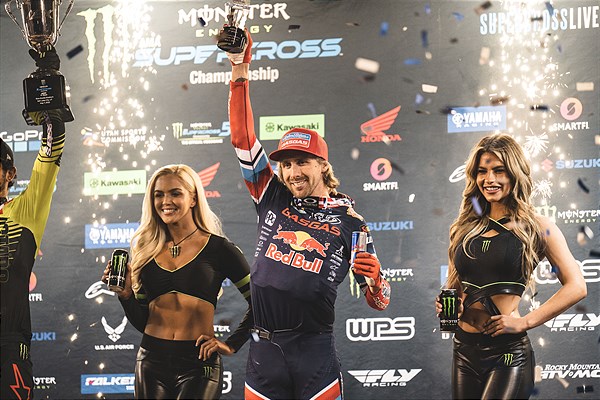 That’s a wrap on the 2022 AMA Supercross Championship from Salt Lake City, Utah and what a night it was! Troy Lee Designs/Red Bull/GASGAS Factory Racing’s Justin Barcia scored a hard-fought podium finish in the 450SX class and teammate Pierce Brown dug his way back from the Last Chance Qualifier straight onto the Main Event podium with a stellar third-place finish in the 250SX East/West Showdown.

It truly was a battle of the ages in front of a lively crowd in Salt Lake City and our riders put on a show all night long. Barcia, the fifth-place qualifier, charged his MC 450F to a second-place start in the heat race and he secured a comfortable runner-up transfer into the Main Event.

With third-place in the championship up for grabs, Barcia was on a mission as the gate dropped for the Main Event. He grabbed a top-five start and quickly charged into third, where he got into a race-long battle for the final podium spot. Swapping spots a couple times midway through, Barcia was able to hold his own as he fought through lapped traffic late in the race to come away with third on the night.

After one hell of a season, Barcia finished just shy of a top-three overall in the 450SX Championship with six podiums and five top-five finishes throughout the year.

Justin Barcia:“I’m happy to end the supercross series with a podium finish here in Salt Lake City. Obviously, tonight’s racing was intense but we were racing for third in the championship and I was going for it. All-in-all, I’m stoked with how the season went, we had a lot of fun together as a team and we definitely have some positives to take away and bring into the outdoor series.”

The best riders from both 250SX divisions came together for another East/West Showdown tonight, with each coast taking a separate qualifying path into one combined Main Event. In the West heat, Michael Mosiman found himself back in eighth off the start and he put his head down to make a charge but he went down and wasn’t able to qualify directly into the Main Event.

It was a tough go for teammate Pierce Brown in the 250SX East heat, too, as he got tangled up right away on the opening lap. Re-mounting outside the top-15, Brown got himself back into striking distance but another crash dropped him back again and he was forced to join his teammate in the Last Chance Qualifier.

In the LCQ, it was Brown who got out front early on and he led the race from start to finish. Mosiman got off to a slower start in the quick seven-lap race but he made his way up to second on the last lap, giving the GASGAS duo 1-2 transfers into the E/W Showdown Main Event.

Coming from the outside gate, Brown nailed his jump off the line to capture a sixth-place start and he clicked off fast laps to reach podium contention early on. Overtaking third on lap six, the Utah native fought hard to maintain a top-three position for the rest of the race. Finishing on the box for the third time this season, Brown locked in a career-best third overall in the 250SX Eastern Regional Championship.

Pierce Brown:“It was a good day. I had a tough heat race, I made a couple mistakes and got together with a couple riders but we pulled it together for the LCQ. In the Main Event, I trusted myself and committed from the outside gate and ended up top-five in the first couple laps. I passed a few guys and ended up third on the night. I was the first east coast guy and that felt good also. All-in-all, I’m stoked on the season, we clinched third in the series, which is my best supercross season yet, and I’m really excited with how we grew all season with the team and I’m just stoked for more!”

Mosiman found himself buried off the start of the Main Event and he did his best to climb through the pack. Coming from outside the top-10 on the opening lap, Mosiman fought his way back to seventh on the night. Concluding the season with one Main Event victory in San Diego, and four additional podium finishes, Mosiman has solidified third in the 250SX Western Regional Championship.

Michael Mosiman:“It was a tough night for me to cap off a season with a lot of highs and lows. I think my season just spoke a lot to what supercross is – both challenging and difficult – but also, there is glory to be fought for. There were a lot of great moments and building moments, and some of the struggles are only fuel to the fire. I can’t wait for the outdoor season!”

Championship Standings – After Round 17