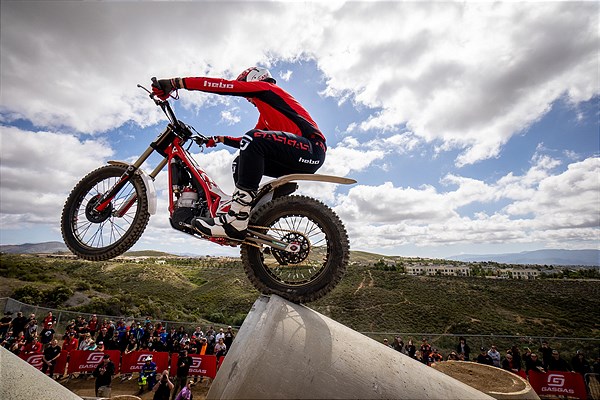 What an event it was at the 2022 California Trials Invitational (CTI) presented by GASGAS! With our own GASGAS Trials riders sweeping all three classes for the first-time ever, the third annual event was full of excitement as the top Trials competitors in the U.S. came together for some fun and friendly competition in Murrieta, California. Our GASGAS Trials Team’s newest member, Josh Roper, came away with top honors on Wednesday after edging out 12-time AMA NATC Champion Pat Smage (Sherco) to score his second-straight California Trials Invitational Championship. GASGAS riders Maddie Hoover and Murphy Aaron completed the sweep with first-time wins in their respective divisions.

Now in its third year, the California Trials Invitational was created in 2020 as a way to support the sport of Trials and motorcycling. Taking place at the GASGAS Trials Team facility in Murrieta, California, all eyes were glued on the uniquely crafted course to witness the best competitors in Men’s Pro, Women’s Pro and the newly-added Junior Pro class for 2022, and they were put to the test with an unconventional format on the man-made course.

Following an exciting nail-biter at last year’s event, the Men’s Pro action didn’t disappoint and it was Josh Roper who once again put his name at the top of the list after two laps around the six-section course. It didn’t come easy for the back-to-back event winner, who was joined this year by FactoryONE Sherco’s Pat Smage for the first time ever at this event. On the first lap, it was Roper who dominated aboard his TXT Racing 300 early on with five cleans in the first six sections. Smage promptly answered back with three cleans and a low score, and they continued to go tit-for-tat into the second lap. Unlike a typical “outdoor” trial, where the riders circulate at their own paces, each rider took the sections in turn, making for a close battle all the way to the end. The difference came in the final moments of the day as Roper made a clean last-run to edge out the veteran icon, Smage, by just one point in the overall running.

Finishing third overall was GASGAS Trials rider Daniel Blanc-Gonnet, who put together a solid day on his TXT Racing 300.

Josh Roper, GASGAS, Overall Champion: „I ended up pulling out a win here at the CTI presented by GASGAS and it was a really good day! I felt really solid on the bike and it kind of came down to the very last second and I somehow managed to pull away with the win. I’m very happy and want to give a big thanks to the whole GASGAS USA team. The course was pretty difficult – it was a lot more technical than normal – but overall, it was really fun and a fantastic course.”

Pat Smage, Sherco, 2nd Place Overall: „This event was definitely unique for me. Having not done this before, I learned quite a bit about what this event is all about but it definitely didn’t help my confidence early on. I felt shaky all day and took some single points and there was no room for error with how Josh was riding. I’m definitely glad I came out and got to experience it before I’m done competing.”

Daniel Blanc-Gonnet, GASGAS, 3rd Place Overall: “Overall it was a pretty good day, I felt like I started off pretty strong and hit my marks but I started losing focus and I was able to rebound back after that and finish off strong. I felt like the second loop traction was a little less, so it was a little bit tricky, but I put my head down and got through the last two sections. I’m just stoked for my teammate Josh, it was his first time beating Pat Smage, so that’s really exciting.”

In the Women’s Pro division, it was another exciting showcase between four-time AMA NATC Women’s Pro Champion Maddie Hoover and two-time California Trials winner Louise Forsley (Sherco). Evenly matched on the first lap, both competitors came into the second lap tied in points and it was Hoover who excelled late in the day, despite a five-pointer in the final section, to earn her first California Trials Championship.

Maddie Hoover, GASGAS:“I started off the day pretty shaky, I wasn’t feeling very confident and it took about four sections to finally start riding and not stress about the results. The second lap picked up and I was feeling really good going in with only four points in the last section and unfortunately, I took a five in the last section, which I’m not too happy about, but I managed to pull out the win today. It’s really exciting because I’ve never won this event and Louise is very formidable competition, so it’s a good feeling and I’m glad that everybody had fun today.”

Adding the Junior Pro division for the first time in 2022, the California Trials Invitational showcased the sport’s up-and-coming talent in the national ranks. Murphy Aaron helped make it a clean sweep for GASGAS with a narrow one-point win over Ryon Land (Vertigo) after two rounds of the six-section course. The young Max Glueck (Sherco) rounded out the CTI’s first-ever Junior Pro top-three.

Murphy Aaron, GASGAS: “I had a pretty good day today! The first loop started off pretty good and I kind of messed up at the end but the scores were close going into the second loop. That was a little nerve wracking at first, I messed it up at the beginning and somehow pulled it off at the end. It was for sure a hard trial but I got through it and had fun!”

Geoff Aaron, GASGAS Trials Team Manager: “I’m really proud of this event and what it has grown into over the last three years. It’s always a challenge for me to create these sections for these riders, they keep getting better and better every year. Quite honestly, we got beat pretty bad the last two years so this is a nice redemption for GASGAS to take the wins in all three classes and it’s just a great promotion for the sport of trials. Since the KTM Group acquired the GASGAS brand in 2019, we’ve been putting our heads together to try and promote the sport and this is one of the ways we could do it. Doing it in the small footprint, having the TV coverage and promoting our pro riders is a really cool way for us to show off our training facility, put more eyes on the sport and hope that we can have a stronger future for it.”

Full coverage of all the action from the 2022 California Trials Invitational will air on May 26 at 11:30 a.m. EDT on Fox Sports 1.