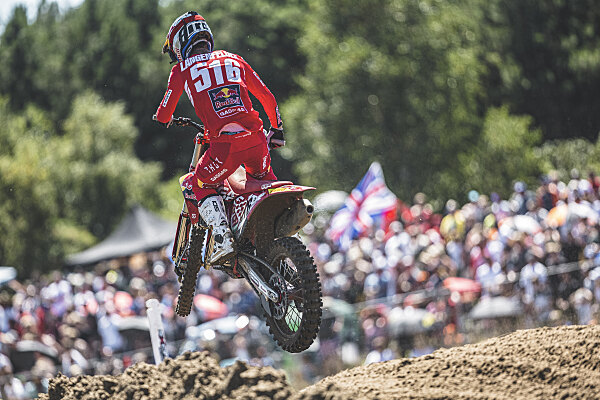 Getting on the gas in the bottomless sand of Lommel! The Red Bull GASGAS Factory Racing riders managed to salvage good points at the Grand Prix of Flanders, the fourteenth stop of the 2022 FIM Motocross World Championship, despite the brutal conditions. Tackling the sand on one of the hottest weekends of the year made the Grand Prix a memorable one.

Continuing his rapid progress aboard the MC 250F, Simon Langenfelder impressed in the rugged conditions. Starting fifth in moto one, he quickly got to work and hounded the riders ahead. It was an impressive effort, as he progressed late in the moto whilst others struggled to make it to the finish line, and that resulted in him claiming third. The second moto was even more encouraging. Langenfelder chased the race leaders and passed the winner of the first stint to move into second, before a couple of mistakes restricted him to ninth at the chequered flag. ‚516‘ was fourth overall, tied with third, but still has a firm grip on third in the championship standings.

Simon Langenfelder: „I had two good starts today! I took my time in the first moto and got to third. I was riding really well in the second moto and got into second. I gave it everything that I had, so I was just finished at the end and made too many mistakes. I am looking forward to bouncing back at the MXGP of Sweden.“

Using the power within his MC 450F to take the holeshot in moto one, Jorge Prado led for three laps before salvaging a ninth on a day where he was not quite one hundred percent. The pace that ’61‘ has was still on show though; he recorded the second quickest lap of the race. Another holeshot was claimed in the second moto, but a small error caused him to fall down the order and he salvaged tenth place from there. A 9-10 scorecard put him in eighth overall at the Grand Prix.

Mattia Guadagnini continued his consistent progress aboard the MC 450F. Battling to another eighth place in moto one was impressive, especially considering that this is the first time that ‚101‘ has raced at Lommel in the premier division. Unfortunately, a fall early in moto two meant that he could only climb to sixteenth. 8-16 moto scores put him twelfth in the overall classification and helped him move closer to the top fifteen in the premier-class standings.

Mattia Guadagnini: „This was a really tough Grand Prix. I had a good start in the first moto and kept the rhythm with the front guys, so I managed to finish eighth. Another eighth place! I crashed with some other riders at the beginning of moto two and lost a lot of positions. It was a hard moto, but I got back to sixteenth.“

There is a break in the calendar now, so riders will have a chance to reset before three events in succession. The Grand Prix of Sweden, held at Uddevalla, is next on the agenda and will be run on August 07.