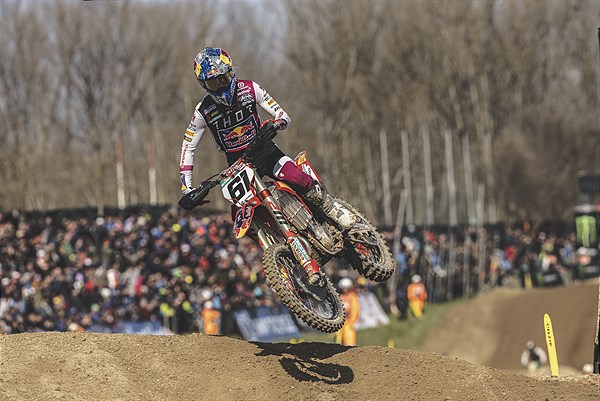 JORGE PRADO RACES TO MOTO WIN AND THIRD OVERALL AT MXGP OF LOMBARDIA.

Riding a wave of momentum after a successful first round of the 2022 FIM Motocross World Championship, Red Bull GASGAS Factory Racing tackled today’s Grand Prix of Lombardia in hot pursuit of more silverware. The shallow sand of Mantova was the battleground that provided more success and delight for the GASGAS trio of Jorge Prado, Mattia Guadagnini and Simon Langenfelder.

Jorge Prado was perfect in the first MXGP moto on Sunday, as he used the power in his MC 450F to take an impressive holeshot and did not put a foot wrong. There was immense pressure from the two riders behind him, but Prado kept his head down and led every lap en route to a clear moto victory. A mediocre start hindered him in moto two, as well as some mistakes, but he battled until the very end to salvage seventh at the checkered flag. Prado stood on the overall podium in third place and still sits second in the championship standings.

Jorge Prado: „The first moto was very good! I got the holeshot and won the moto. My start was not so great in the second moto, but I knew that I had the pace to get to the front. I was not too stressed about that. I got sand in my eyes and struggled with that through the race, then I made a mistake with three laps to go and lost a couple of positions. I am not really happy with the second moto, but the championship is going to be very long.“

Simon Langenfelder was an impressive seventh in the first MX2 moto, despite the fact that an unavoidable crash in qualifying left him with the seventeenth gate pick. Langenfelder completed lap one in eleventh and charged to seventh by the time that the checkered flag waved. Phenomenal is the best way to describe the way that he sliced through the field in moto two. Amazingly, he got on the gas and progressed from twelfth on the first lap to second! Langenfelder had the fastest lap too, despite a crash. Fourth was his final ranking in the overall classification and he now sits second in the championship standings.

For Mattia Guadagnini, the overall result that he took at the Grand Prix of Lombardia does not tell the full story. An unfortunate crash early on in the first moto scuppered his chances of landing on the podium – he had to work his way from outside of the top fifteen to eleventh at the end. A mediocre start hindered him in the second moto, but he showed impressive pace to go from fifteenth to ninth in the eighteen-lap moto. 11-9 scores put him in ninth overall at the Grand Prix of Lombardia.

Simon Langenfelder: „I did not have the best gate pick, especially for this track, but I had a good first corner in the first moto and was around tenth. I made some passes and got up to seventh, which I was happy with. My start in the second moto was a little bit worse. I made passes and then crashed around the halfway mark, but I was already feeling unbelievably good. I caught the riders ahead of me and finished second. It was an unbelievable feeling – I was so happy! I think that we made the best out of a bad weekend.”

Mattia Guadagnini: „It was not the best weekend for me. I just could not make it work today. I did not have the best start in the first moto, but I was around fifth and then I crashed. I made some passes and finished eleventh. My start was really bad in the second moto – I was not riding too bad in that one though. I finished ninth. I know that I am a lot better than this. I am sure that we will be at the front soon.“

Red Bull GASGAS Factory Racing will take advantage of a weekend off now, before making the long journey to the Grand Prix of Patagonia-Argentina. The spectacular track of Neuquén will host the third round of the 2022 FIM Motocross World Championship on March 19/20.