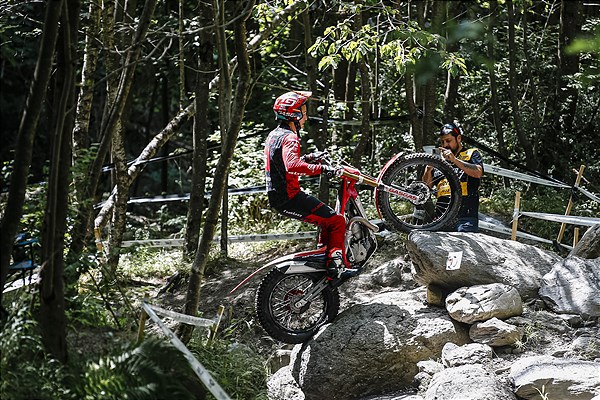 GELABERT LEADS THE WAY FOR GASGAS AT TRIALGP ROUND TWO.

Backing up his solid performances at the opening round of the 2022 FIM Trial World Championship in Spain last weekend, GASGAS Factory Racing’s Miquel Gelabert has delivered the team’s best results at the TrialGP of Andorra, finishing a strong sixth on day one before posting an 11th place finish on day two. Ending the event on a positive note, the two-day competition proved to be a tough one for Gelabert’s team-mate Benoit Bincaz. The Frenchman placed 12th on day one before improving to ninth on day two.

Serving up the kind of steep and spectacular sections that only the TrialGP of Andorra can, round two of the 2022 FIM Trial World Championship was anything but simple! With a mixture of challenging, lose climbs and slippery river sections, for both Miquel Gelabert and Benoit Bincaz it was an event full of mixed fortunes.

Although unable to get himself onto the podium, Gelabert challenged for the top three throughout day one but saw his final result hampered by some frustrating scores in the many river sections that dominated the closing sections of each lap. Despite being only one point behind fifth and just eight points from third, the Spaniard placed sixth for the day.

On the final day of competition Miquel’s hopes of bettering his day one result failed to materialize, placing eighth. With two rounds completed Miquel sits sixth in the TrialGP championship standings.

Despite generally not being able to perform at his best at round two, Benoit Bincaz wrapped up the TrialGP of Andorra with a positive second and final lap on day two. Dropping just 19 marks, the Frenchman massively improved on his opening-lap performance from day one. Finishing 12th on day one and inside the top 10 with ninth on day two, Bincaz sits tenth in the TrialGP championship standings.

Once again showing that a lack of Trial2 class experience is no reason not to challenge for the podium, Jack Dance enjoyed two positive days in Andorra. Finishing sixth and just four marks from the top three on day one, he then placed 11th, just 14 marks from the podium, on day two.

Miquel Gelabert:“The GP of Andorra was pretty similar on both days for me. On Saturday I rode well during the first section, the dry sections, but in the wetter, slippery sections I didn’t ride so well. This was partly because of the time but also because I just found that I couldn’t ride like I needed to there. So, eventually I finished sixth on day one. It wasn’t the result I wanted, but it wasn’t too bad. I was super motivated to do better today on day two, but again I made a lot of mistakes in the river sections. There were eight sections there so it was hard for me to get to the podium. So, not the result I wanted today but we’ll keep working and be ready for the next round in Germany.”

Benoit Bincaz: “It’s certainly not been the results I wanted as I know I can do much better, but I’m happy with the way the weekend ended. On day one my riding was just not good enough. I was not happy, but I was unable to make the changes I needed to make improvements. Thankfully, things were better for me on day two. On the second lap today, I lost 19 points compared to 50 points on the first lap on day one, so that was a big improvement. We’ll keep working and be ready for Germany.”

TrialGP Championship Standings (after round 2)