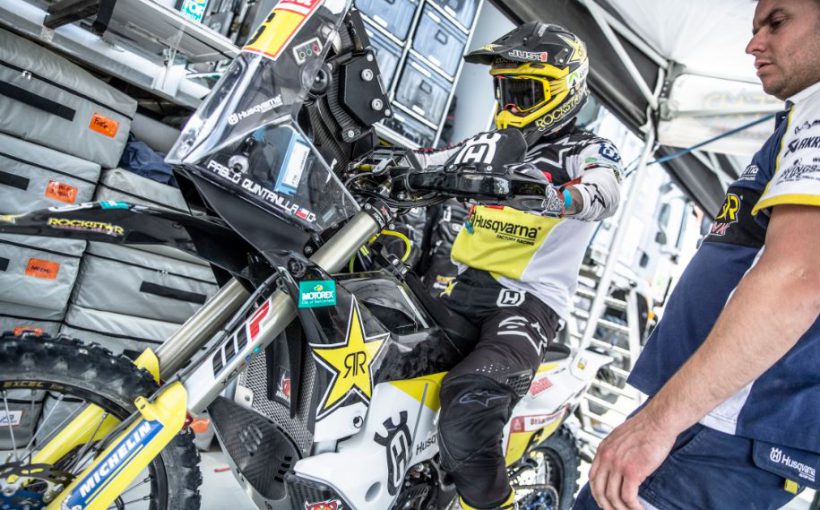 Well placed inside the top 10 at this year’s Dakar Rally, both Rockstar Energy Husqvarna Factory Racing’s Pablo Quintanilla and Andrew Short are looking forward to the demanding second week of racing that lies ahead in Peru.

Pablo Quintanilla has so far been a force to be reckoned with during this year’s event. Following a well calculated plan, the Chilean rally star has arrived at the Rest Day holding on to a solid third position in the event’s provisional overall standings. Enjoying a well-deserved day of rest today at the Arequipa bivouac, Pablo is excited to keep battling during the second week of the Dakar, which starts tomorrow.

In just his second participation in the world’s toughest rally, Andrew Short has battled with many of the motorcycle class’ top contenders. Securing a career best fifth place result on the second day of the marathon stage, the American racer is currently 10th in the provisional overall standings.

Heading to the start of the next stage late on Saturday afternoon, on Sunday competitors will face one of the toughest stages of this year’s Dakar Rally. Starting their long trip back to Lima tomorrow, stage six to San Juan de Marcona features a 336km timed special.

Pablo Quintanilla: “I am really happy with my performance during the first week of this Dakar. I’ve had some good results in some stages. For me it was also important to reach the Rest Day inside the top five and have a good starting position for stage six. It looks like my strategy from Friday worked out quite well, now I have a great starting position for tomorrow. This gives me the opportunity to make up a lot of time in the overall and I’m looking forward to tomorrow’s stage. My bike is running great and I’m enjoying my riding here in Peru. I really like the landscape and the terrain here. A podium result would be good but, honestly, I’m focused on the overall victory. This is my main goal for this Dakar and I am motivated to keep fighting to make it happen.”

Andrew Short: “The first part of this rally went quite well for me. I expected more sand dunes, but it turned out to be more tricky than that. There was a lot of fesh-fesh and some technical bits in the mountains. My body is in a great shape right now and I’ve recovered well from some crashes I had during the first week. I’m looking forward to the second part of this rally. Hopefully I can stay smooth and steady and keep my momentum to finish strong. Today I’m preparing for the upcoming days and it’s quite important to have a strategy for the stages to come. It’s also crucial to rest. My position at the moment is decent and hopefully I can improve on it during the second week of racing here in Peru.”