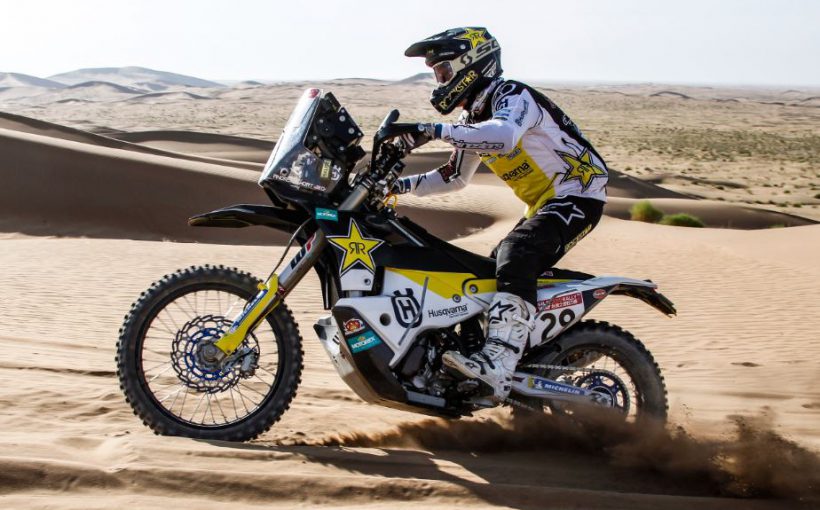 Returning to action for round three of the 2019 FIM Cross-Country Rallies World Championship, the two-man Rockstar Energy Husqvarna Factory Racing team of Andrew Short and Pablo Quintanilla will take on the tough Atacama Rally in Chile from Monday September 2.

Fresh from his runner-up performance in the Silk Way Rally in July, Andrew Short is feeling fit and eager to maintain the strong run of form that sees him lying second in the current world championship standings. The Silk Way welcomed motorcycles for the first time ever this year and as such, provided a level playing field for all competitors with Short using that to his advantage to claim second place. The 2019 Atacama Rally will mark Andrew’s second entry in the event as the American rider hopes to use his increasing experience to fight for stage wins while also challenging for the overall victory.

Making his first competitive outing since the Dakar Rally in January, Pablo Quintanilla will come into the Atacama Rally looking to reacquaint himself with his Husqvarna FR 450 Rally. However, as a former winner of the event, Quintanilla will also be looking to impress on home soil and will be keen to get back up to speed as fast as possible. Close to being fully fit, the Chilean native will almost certainly be a challenger for the podium.

The 2019 Atacama rally commences on Sunday, September 1 with technical checks and administration in the town of Copiapó. Monday sees a short Prologue stage that will decide the start-order for Tuesday’s first full day of racing. The rally includes five stages in total, covering a distance of over 1,600 kilometres. Similarly to last year, the event will challenge all competitors with a variety of terrain including the steep, sandy dunes of the Atacama Desert and rough, faster tracks that truly test both the riders focus and stamina. With tricky navigation thrown into the mix, the third round of the 2019 world championship looks set to be one of the toughest of the year.

Andrew Short:“I’m really looking forward to the Atacama, I enjoyed the race last year. I love the terrain there – the sandy valleys and dunes – but the biggest difference for me this year is having a year’s experience and a better idea of how the race unfolds. The route looks similar to last year with the addition of a marathon stage so that will be neat. We also have a Prologue too, to set the starting order for the rally – that really affects the overall strategy for the race. For me, the Atacama and the last round in Morocco are really the start of the preparations for Dakar. From here on we’re looking ahead to next year’s event in Saudi Arabia and everything is starting to build towards that now. I hope to continue to do as well as I have in the last two world rounds, but I know it’s going to be a really big challenge from now on as we’re going to be joined by more competitors, namely my teammate Pablo and then a few other riders like Toby and Matthias. I’m confident though and feeling really good right now – I can’t wait to get started.”

Pablo Quintanilla:“I feel super happy and motivated to be able to race again after seven months. It’s been a really tough time for me – very painful, but to be able to go to the Atacama and restart racing is a really cool feeling. Ideally it would be nice to be in a better condition and have more time on the bike but it feels great to be able to go and join the team again and compete. My plan is to enjoy the race, but of course I will give it 100 percent and we’ll see how things go.”