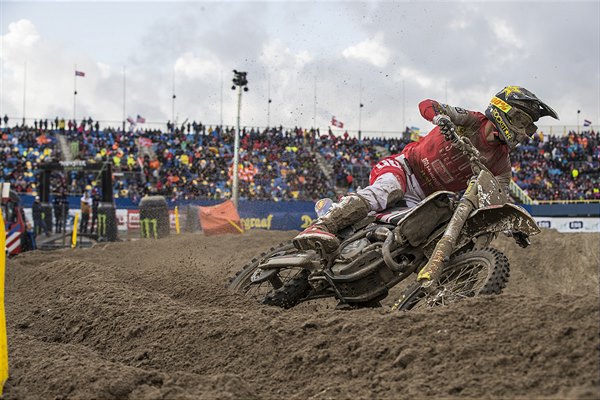 Serving up extremely wet, windy and challenging conditions, the deep Assen sand presented a myriad of challenges for all riders with the 2019 edition of the MXoN widely considered one of the hardest ever.

Placing a highly-creditable eighth overall in both the combined MXGP/MX2 and MX2/Open races, Kjer Olsen wrapped-up his 2019 season in style. Focused on enjoying the prestigious end-of-year event, as well as wanting to deliver winning MX2 class performances, the Dane remained positive throughout the day despite the dismal weather conditions.

Starting well in his first race (MXGP/MX2), TKO rounded the opening lap in 13th. Pushing hard throughout the moto, and managing to avoid mistakes, he steadily worked his way forwards, firstly into 11th on lap three before jumping to ninth on lap six. Moving into eighth on lap nine he completed the remaining eight laps without issues to finish eighth and as the highest finishing MX2 class rider.

With little time to rest, Kjer Olsen was soon back behind the gate for the MX2/Open race. Knowing what to expect from the unpredictable track he started well to complete the first lap in 11th. Up to sixth on lap five he again made light work of the conditions and eventually placed eighth, the second-highest MX2 class rider.

Entering today’s racing in high spirits following a winning performance in his Open class qualification race, Pauls Jonass mastered the conditions to deliver two impressive moto performances aboard his FC 450. In his first race [MX2/Open] he made a strong start, completing the opening lap in fourth. Close to the front of the race and able to keep away from trouble he moved into third on lap two before continuing his forward momentum and hitting the runner-up spot on lap three. Pushing a strong pace throughout the race, Jonass claimed a well-deserved second-place result.

In his second moto, the combined MXGP/Open race, the Latvian again made a strong start. Third at the end of the opening lap Jonass once again mastered the hugely challenging conditions to place third. With it he finished as the second best performing overall Open class rider, while also helping Team Latvia claim a best ever result of eighth.

The 73rd running of the FIM Motocross of Nations proved to be a challenging one for Rockstar Energy Husqvarna’s Team USA riders Zach Osborne and Jason Anderson. Both enduring one difficult race each, Osborne made a positive start to today’s racing by placing fifth in his first [MX2/Open] race, having worked his way forward from seventh on lap one. In the MXGP/Open moto Zach completed the first lap in 15th before dropping to 20th following a stop to change goggles. Quickly back up to 15th he kept charging to the finish, eventually placing a hard-fought 13th.

For Anderson things took a turn for the worst early in his opening moto [MXGP/MX2] as a collision with countryman Justin Cooper sent the 2018 AMA 450 Supercross champion crashing to the ground. Picking himself up to complete the opening lap in 31st position, Anderson charged his way to 13th on lap 15 before finishing 17th.

Thankfully for the American his second moto [Open/MXGP] was far less eventful, despite hugely challenging conditions. Avoiding trouble on the opening lap he found himself just inside the top 10. Holding sixth from lap five to lap 12 he eventually placed eighth. Despite his difficult opening moto Jason placed sixth in the MXGP classification.

Injuring an ankle during his final preparations for the Motocross of Nations, Arminas Jasikonis was forced to withdraw from the event. Taking part in the MXGP class free practice session, the tall Lithuanian took no further part in the event.

Thomas Kjer-Olsen – Team Denmark [MX2]:“I couldn’t have asked for a better way to end the season. Finishing as the best overall MX2 rider is amazing – it’s what I hoped to achieve but in these conditions anything can happen. We had so much rain here it’s hard to believe. I really tried to stay positive and just focus on riding as well as I could. The sand was so deep in places you really had to keep focused everywhere. The conditions were even harder on the 250 bikes, but my bike was perfect in both motos. I made some passes on a few 450 riders, which was cool, but I’m just pleased nothing crazy happened to me. Racing with the 450s is tough, but both motos went well. This is a great way to end the season.”

Pauls Jonass – Team Latvia [Open]:“Wow, what a crazy race. Like everyone, I knew this was going to be a really tough day, but I like these conditions and was really looking forward to it. Also, I wanted to end my season with good results. I did that and team Latvia finished eighth overall, our best ever result. The sand was so, so deep in places – it was so easy to make a mistake. I got a good start in the first race, which was really important. Being close to the front of the pack makes a big, big difference. I made some passes and felt good in second. I pushed to try and close the gap to Glenn [Coldenhoff] but I got stuck with a lapper and dropped back. Second was still a great result. I got a decent start in the second race and just tried to keep pushing forwards. The conditions were really bad, so to finish the Nations with a 2/3 result is fantastic. Everyone in the team has worked so hard this weekend, it’s an amazing way to finish the season.”

Zach Osbourne – Team USA [Open]:“It’s been a tough day for everyone, but maybe especially for Team USA. I feel that we did all we could, we came into the event with a great attitude and a great team, things just didn’t work out for us, but that’s racing. We prepared well, but conditions and luck weren’t with us. I think these might have been the worst conditions I’ve ever raced in, certainly some of the toughest. Each of my motos went ok – they were tough but fifth in my first race was ok. My second race was harder. I got a decent start, but I found it hard to move forwards. Also, I had to change goggles once and, yeah, it was tough. From a team point of view, it’s not at all the result we wanted but I’m sure we’d do it all again to be here racing for our country.”

Jason Anderson – Team USA [MXGP]:“Clearly things didn’t go well for us. We came into this race ready to give it everything, which we did. But it’s been difficult. Crashing early in the first moto was bad. I didn’t get a good start but going down with Justin [Cooper] was the worst way to start that race. You know, these conditions are just brutal. One rider moved, I guess he reacted and it was hard for me to avoid him. It was one of those things, but one of the worst things. I just tried to re-group and do the best I could. The second moto was better – I got up to sixth but then fell and dropped some places. It’s disappointing as a team but it’s racing.”