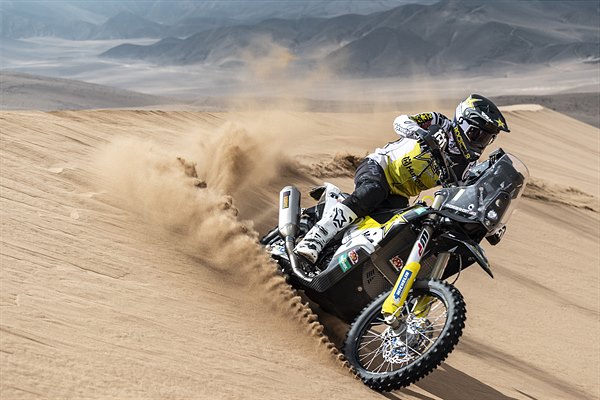 The two-rider Rockstar Energy Husqvarna Factory Racing team of Andrew Short and Pablo Quintanilla have arrived in Morocco to contest the fourth and final round of the 2019 FIM Cross-Country Rallies World Championship. The tough five-day event is held close to the Saharan town of Erfoud from October 4-9.

Although the world championship title was awarded at the previous round in Chile, the fight for second place in the 2019 rankings is still alive and very close – just seven points separates second to fourth in the standings. Despite a challenging Atacama Rally, current second-placed rider Andrew Short still holds a one-point advantage over his closest rival and comes into Morocco looking to secure a runner-up finish in the championship. Seventh at the 2018 Rally du Maroc, Short now has an additional year’s experience under his belt and comes into the final race of the season confident and eager to claim a top result.

Returning to rally competition at round three following a long recovery period from the injury he sustained at the Dakar Rally earlier in the year, Pablo Quintanilla went on to win his home event in remarkable style. Keen to maintain his winning run of form, Pablo will be aiming for more success in Morocco while also making the most of the time onboard his Husqvarna FR 450 Rally ahead of next year’s Dakar Rally in Saudi Arabia.

The 2019 Rally du Maroc commences with a short Prologue stage on the afternoon of Friday October 4, before five demanding days of racing in the dunes and technical trails of the Sahara Desert. Starting and finishing in the city of Fez, the majority of the event will be held on looped stages close to the oasis town of Erfoud. Covering a total distance of 2,506 kilometres, riders will face 1,868 kilometres of timed specials over five tough stages.

Andrew Short:“I’m super excited for Morocco – it’s a big race for me because I’m second in the championship but only by one point over Kevin Benavides. I had a few issues at rounds one and three, but overcame them to get good results. The Silk Way Rally went really well and was really encouraging for me, so I’m planning on carrying this momentum through Morocco and into winter testing. Another thing I’m looking forward to is the new road book. This will be the first race with a coloured road book, pre-painted by the organisation. On certain stages they’re just going to hand us the road book so navigation is going to be super-important and that should fit into my strengths quite well. Hopefully everything goes to plan and I can wrap up the championship as runner-up.”

Pablo Quintanilla:“I’m feeling really good after winning the Atacama. To be able to come back to racing after so long off the bike and take the win at my first event is amazing. I’m really motivated for Morocco, but at the same time I am still recovering my leg and, as always, the main goal is the Dakar. I will of course do my best but it will be important to get through the event safely and do more kilometres on the bike. I’m really excited for the race and looking forward to racing the Moroccan desert once again.”