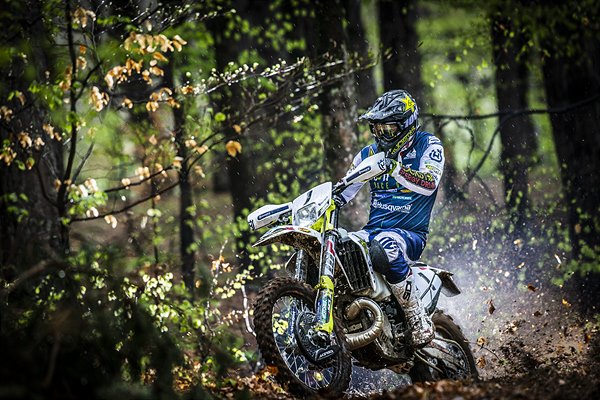 Rockstar Energy Husqvarna Factory Racing riders Graham Jarvis and Alfredo Gomez return to action this weekend, October 4-6, for round seven of the 2019 World Enduro Super Series. New to the WESS calendar for 2019, BR2 Enduro Solsona is a three-day classic enduro event held in the north east of Spain.

Lying second in the World Enduro Super Series standings following round six at Hawkstone Park in England, Graham Jarvis will be looking to collect as many WESS championship points at BR2 Enduro Solsona as possible. Similarly to the Hawkstone Park event, the Spanish classic enduro falls outside the extreme enduro expert’s comfort zone. However, putting in a performance that surprised many of the WESS regulars, the 44-year-old Englishman placed inside the top 10 at his home round to successfully defend his current runner-up position in the rankings. Another solid result in Spain will put Jarvis in a very strong position going into the final round at GetzenRodeo – a race where the experienced hard enduro ace is expected to shine.

Just one place behind teammate Jarvis, Alfredo Gomez lies third overall in the WESS standings. Gomez also had a strong WESS round six, ultimately finishing eighth overall and comes into round seven looking to defend his top-three position. With Solsona marking Alfredo’s second home race of the year, the experienced Spaniard will have the backing of the local fans and is keen to impress on Spanish soil.

Round seven of WESS – BR2 Enduro Solsona – is a three-day event starting with a short Supertest on Friday October 4. Saturday and Sunday will then see riders complete a looped classic enduro course close to the town of Solsona that includes enduro, cross and extreme tests.

Andi Hölzl – Rockstar Energy Husqvarna Factory Racing Team Manager:“We’re looking forward to BR2 Enduro Solsona because Graham and Alfredo are still second and third in the championship and every single point counts. We know it will be a tough race for us, but in WESS, anything can happen and we’re not too far behind the championship leader. While Alfredo will stay on his Husqvarna TE 300i, Graham is going to make the switch to the FE 250 4-stroke. It will be tricky for him to make the change after riding the 2-stroke for so long but I think for this race especially, it will fit him better. It’s definitely going to be a fast race so we’ll see how things go and hopefully we can secure strong results and head into the final round with a good chance of taking the championship title.”