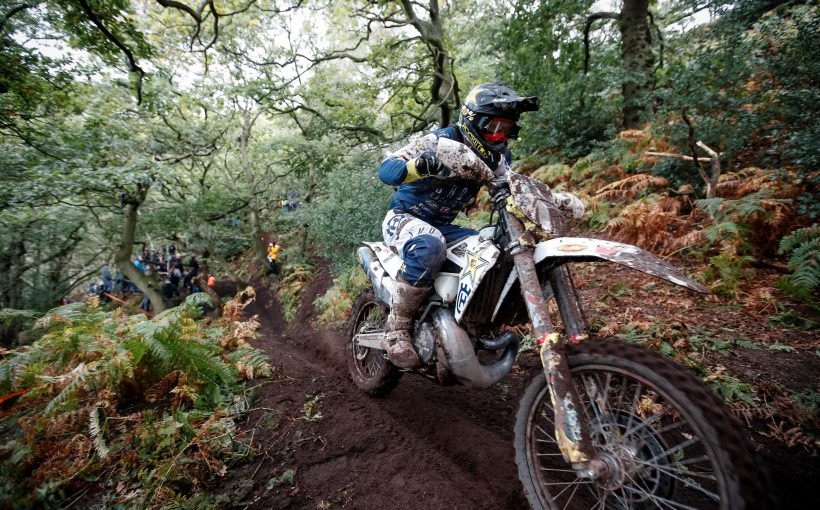 JARVIS, GOMEZ AND BOLT SET TO TAKE ON GETZENRODEO.

Rockstar Energy Husqvarna Factory Racing riders Graham Jarvis, Alfredo Gomez and Billy Bolt are set to take on GetzenRodeo this coming weekend, a one-day extreme enduro held near the city of Zschopau. Marking the eighth and final round of this year’s championship, the event pits 60 riders against one of the toughest courses seen on the WESS calendar.

Graham Jarvis knows the GetzenRodeo format well. Already a three-time winner of the event, the 44-year-old Brit will undoubtedly be looking for his fourth victory and in turn the opportunity to move himself up the final WESS standings. Currently lying fifth, albeit just a handful of points behind second, Jarvis knows a top result in Germany could take him onto the final championship podium.

Another rider with impressive form at GetzenRodeo is Alfredo Gomez. Sitting fourth in the standings, just ahead of teammate Jarvis, the experienced Spaniard finished a close second last year at the German event. One of the leading riders in this year’s WESS, Gomez has already finished as runner-up twice this season and hopes to go one better at the final round. Riding his favoured Husqvarna TE 300i, Alfredo is eager to finish his 2019 season on a high.

2018 World Enduro Super Series Champion Billy Bolt returns to WESS competition in Germany following a period of rest and rehabilitation after mid-season surgery to his leg. The 2019 season has proved tough for the young Brit, with injury at the start of the season resulting in him arriving at round one in Portugal far from 100 percent fit. Despite his disadvantage, Bolt soldiered on, surprising many with a top-five finish. Going on to claim fourth at the challenging Hixpania Hard Enduro, Bolt will now look to make the most of his talents and do all that he can to challenge for a first podium result of 2019 at GetzenRodeo.

The event itself gets underway with a two-hour extreme race on Saturday morning. The top 20 finishers then qualify for the afternoon’s GetzenChamp where, after 80 minutes of racing, riders must complete one extra lap of an especially tough route before reaching the chequered flag.

Round eight of WESS – GetzenRodeo – takes place near Griessbach village in Germany on November 2.

Andi Hölzl – Rockstar Energy Husqvarna Factory Racing Team Manager:“First of all, it’s fantastic to have Billy back racing with us this weekend. Things are looking good for him following his surgery, he’s made some big steps and his recovery has already been very encouraging. Although he won’t be 100 percent fit, the race at Getzen should suit him well and it’s important for him, and for us as a team, to have him racing at this final round. Alfredo was second last year at Getzen and as we have seen this year at all the extreme enduros he’s always up there and fighting for the win. We have seen in the past that conditions can be very challenging in Germany and that makes things very slippery and tough – I believe if it turns out this way, we could easily see Alfredo challenging for the top of the podium. The same goes for Graham of course, you can never count him out and again if the weather is bad, Graham will be right up there, doing what he does best. Although the WESS championship win is probably out of reach, we are still fighting for second and third and Alfredo and Graham both have a good chance of finishing on the podium. It’s looking like it will be an exciting race and a perfect event to end the championship. The fans at Getzen make the race extremely exciting too, so we are all looking forward to it.”