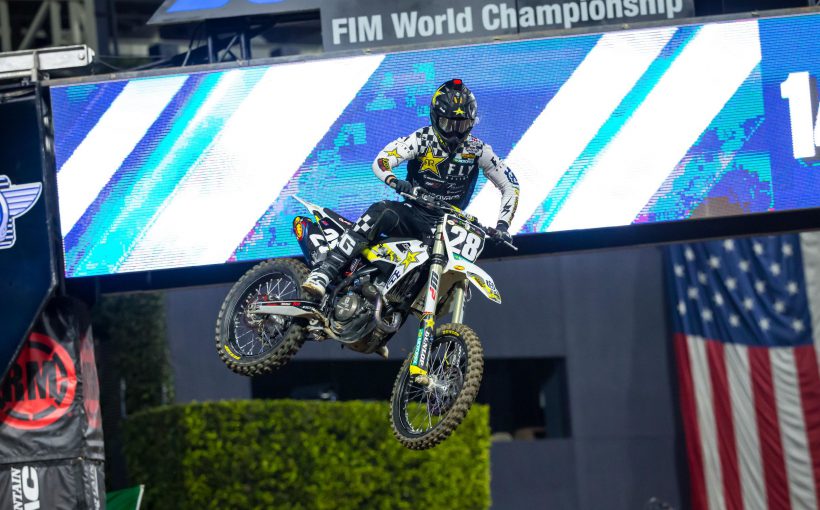 Mosiman had a solid day all-around, beginning with a top-five qualifying time earlier in the day. He lined up in 250SX Heat 2, where he grabbed a great jump off the line and settled into third on the opening lap. He applied pressure to the second-place rider early on as he set up a last-lap pass to overtake second-place just before the checkers. In the Main Event, Mosiman shot off the line to capture the holeshot and early lead. Pulling a nice gap early on, Mosiman led the first four laps before getting passed. He battled inside the top three for two more laps but a mistake dropped him into fourth just before the halfway point. He charged hard in the final laps to ultimately finish just off the podium with fourth.

The 250SX West division will take a six-week break before rounding out the final four rounds of the season, where Mosiman currently sits eighth overall in the standings.

Team rider Zach Osborne had a great night of riding, despite being forced to battle through adversity in the Main Event. In 450SX Heat 1, Osborne shot off the line and into second position. He battled hard for nine laps to capture a second-place transfer into the Main Event. In the main, Osborne had an issue on the opening lap and he was forced to begin in last place. He persistently worked his way through the field to ultimately finish 11th.

Dean Wilson got off to a top-five start in 450SX Heat 2, battling with his teammate Anderson early on. Wilson dropped back to seventh on lap three and he continued to battle his way to a solid transfer into the main. As the gate dropped for the Main Event, Wilson began just outside the top-10 and he worked his way into 12th early on. He battled back-and-forth to ultimately secure 13th.

In 450SX Heat, Anderson got pinched off coming through the first corner but he fought his way up to a fourth-place start early on. He battled for a podium position at the end of the race but he ultimately finished fifth after experiencing a minor issue with his front wheel. In the Main Event, Anderson started off in 11th and as he was working his way forward he ran into an issue that dropped him as far back as 17th. He was able to put on a charge late in the race to ultimately salvage 14th for the night.