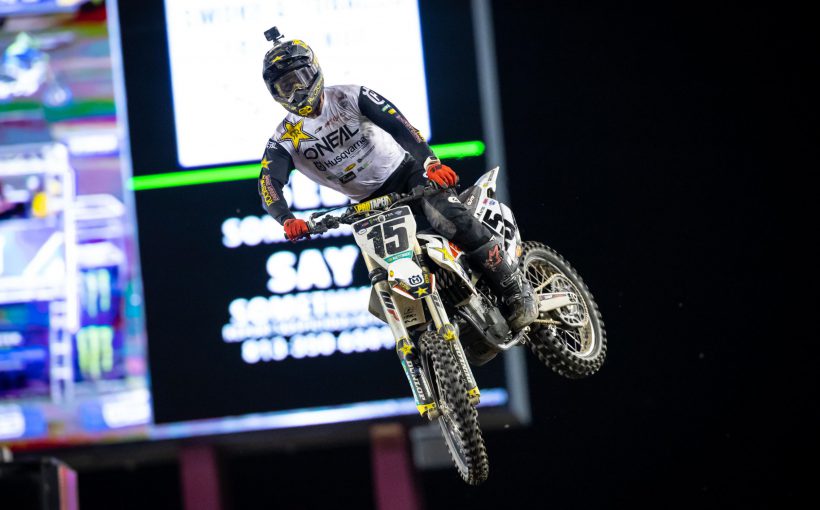 It was a great night of racing for Rockstar Energy Husqvarna Factory Racing’s Dean Wilson, who secured a season-best sixth-place finish in the 450SX class at Round 7 of the 2020 AMA Supercross World Championship Series in Tampa, Florida. Additionally, the 250SX Eastern Regional Championship kicked off on Saturday and team rider RJ Hampshire finished sixth-place in his first race of the season with the team.

In 450SX Heat 1, Wilson grabbed a seventh-place start and he quickly jumped up to sixth by lap two. He continued to charge his way to ultimately secure a solid top-five transfer. In the Main Event, Wilson got off to a top-10 start and he settled into eighth early on. He continued to make a push through the second half of the race to ultimately finish with a season-best sixth-place in the Main Event.

“The Main Event went pretty good, I think it was a step in the right direction,” Wilson said. “It’s been pretty tough coming back from injury to a class that’s so stacked but I’ve been pushing through and it’s nice to see a half-decent result. I’m going to use this for next weekend and build off of it and keep it going.”

Anderson, the fifth-place qualifier, lined up in 450SX Heat 2 where he got off to a top-10 start. He charged his way up to sixth early on, where he held strong to capture a sixth-place transfer position. In the Main Event, Anderson didn’t get the best jump as he rounded the opening lap in 14th. He put his head down and clawed his way up to 10th by the halfway point, ultimately grabbing two more positions for eighth. Following the race, Anderson was docked two positions to 10th place due to a rule infraction during the Main Event. He now sits sixth overall in the 450SX Championship after seven rounds.

Team rider Zach Osborne got off to a third-place start in 450SX Heat 2 and he maintained a top-three position throughout the nine-lap race, earning a solid transfer into the Main Event. In the main, Osborne had a great jump off the line but he went down early on the opening lap and dropped to the back of the pack. He began charging his way through the field coming all the way from 21st to ultimately finish 11th.

Following six rounds of 250SX West action, the Eastern division kicked off its first round of the season on Saturday with riders RJ Hampshire and Jalek Swoll in tow. Hampshire got off to a top-10 start in 250SX East Heat 2 and he worked his way into fifth by lap four. He charged up to third on lap six and he maintained a solid pace to secure a third-place transfer into the Main Event. In the main, Hampshire started off in seventh and he battled his way up to fifth early on. He continued to battle around the top five before vaulting himself into fourth late in the race. With three laps to go, Hampshire went down and ultimately finished sixth in the Main Event.

“I was pretty nervous coming into it,” Hampshire said. “In the Main Event, I had a better start but I got caught up in the first turn. The opening laps were rough but once I got into a flow I was feeling the best I’ve felt all day. I made a pretty good charge but I crashed with two laps to go while going for the podium. We made a lot of improvements throughout the day and I think we’re in a good spot.”

Jalek Swoll got off to a great start in 250SX Heat 2, where he settled into third early on. Swoll battled inside the top-three on the opening lap but he went down on lap two and was forced to line up for the last chance qualifier. In the LCQ, Swoll began in eighth and he charged his way up to fifth. On the final lap, he battled all the way through the checkers to narrowly miss the final transfer spot by only 0.08 seconds.

“I think speed-wise I’m not lacking confidence at all, I just need to get myself in a better position moving forward,” Swoll said. “I was feeling really good in the heat race but an unfortunate mishap in the whoops caused me to go down and I banged up my clutch and bars a little bit so I ended up pulling off. That didn’t help me in the LCQ with a 26th gate pick. I got pinched off on the start and tried to come back to the top-four and it came down to the last corner and I just missed the last transfer position.”