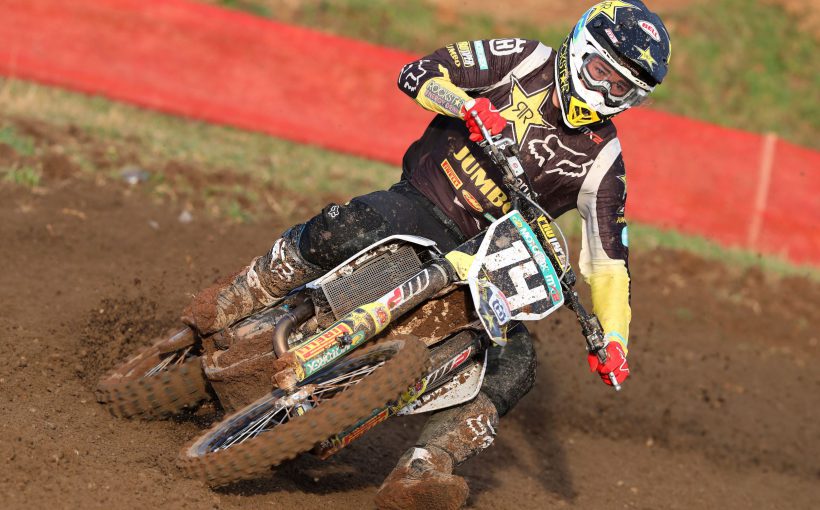 Bringing their pre-season racing schedule to a positive close, Rockstar Energy Husqvarna Factory Racing’s Jed Beaton, Kay de Wolf and Pauls Jonass have all successfully completed their final warm-up race ahead of the start of the 2020 FIM Motocross World Championship. Competing in the Mastercross Lacapelle Marival event in France, Beaton secured the overall runner-up position aboard his FC 250 in the MX2 class, with Pauls Jonass returning to competition following illness to finish fifth overall in the MX1 class aboard his FC 450.

With the recent Hawkstone International largely an exercise in survival due to the hugely challenging weather and track conditions in England last weekend, the Mastercross Lacapelle Marival delivered near-perfect track conditions and close racing across all classes.

Securing Rockstar Energy Husqvarna’s best result in the MX2 class, Jed Beaton enjoyed two positive outings to claim a deserved overall runner-up result. Placing comfortably inside the top 10 off the start in each of the two MX2 motos, Jed spent much of the opening race in fourth before moving ahead of Jago Geerts with two laps to go.

Race two saw Jed start well, completing the first lap in fourth. Taking some time to find his rhythm around the French track, the Australian settled into a strong pace during the second half of the moto to finish just four seconds behind eventual overall winner Tom Vialle. In the combined 450/250 Super Finale, Jed placed 12th, the third-highest MX2 class rider.

With Thomas Kjer Olsen not racing the Mastercross Lacapelle Marival event, youngster Kay de Wolf completed Rockstar Energy Husqvarna’s 250cc line-up in France. Enduring a tough opening moto, in which he both crashed and also damaged his rear brake pedal, he nevertheless battled on to a 16th place finish. Finishing 11th in the second race and qualifying for the end-of-event Super Finale, Kay gained valuable experience ahead of his first full season aboard an FC 250 machine.

Returning to action following several weeks away from competition due to sickness, Pauls Jonass secured fifth overall in the MX1 class aboard his FC 450 following fifth and fourth place results, before rounding out his participation at the French event with sixth in the Super Finale. Starting well in race one but then getting a little too aggressive during the early laps, Pauls struggled with arm pump mid-race before pushing hard during the closing laps to earn fifth.

Running as high as second in the final MX1 moto, Pauls got a great start but then made a few mid-race mistakes, which prevented him from challenging the lead riders. Delivering a notably improved overall performance he finished the race in a strong fourth before completing his event with a sixth-place result in the Super Finale.

The 2020 Mastercross Lacapelle Marival completes Rockstar Energy Husqvarna Factory Racing’s pre-season race schedule. Next up the team will compete in the opening round of the 2020 FIM Motocross World Championship, the MXGP of Great Britain at Matterley Basin, England.

Jed Beaton:“Yeah, I’m pretty pleased with the way today went. It’s really nice to get to race a pre-season event that’s not super wet and is in good condition and has good grip. The two motos went well enough for me. In the first race I didn’t get the best of starts, I think I was down in fifth or sixth before getting up to third. I stayed there for quite a few laps, before the top two guys got into the lappers. It got pretty intense there for a while and I was able to close up a lot. Third was a good result. I took a little while to get into a rhythm in the second race although I was in second for most of the time. I felt like I rode a lot better in the second half and to finish second overall is positive ahead of the first GP in a couple of weeks.”

Kay de Wolf:“I really enjoyed today. Last weekend was tough for everyone with the conditions, so it was good to be able to really race. The first race was difficult – I damaged my rear brake and then crashed and pushed my front brake lever down. It was really hard racing like that, but I got 16th and finished the moto. Race two was much better and my riding was good. Also, making it into the super final was good. The small amount of time between the second MX2 race and super final made that a tough race but overall I’m pleased with my speed and the way I made passes.”

Pauls Jonass:“It’s been good to be back racing after a few weeks off, but I feel like things could have gone a little better today, still a few too many small mistakes. I got a good start in the first race and went too hard too soon, and that cost me mid-race. There were some pretty deep lines on the track and you needed to be smooth – I pushed a bit too hard. Things were better at the end of the race but there was no time left to really improve my result then. I got a great start in the second moto and really tried to be smooth. I made a few small mistakes, but things were better than race one. Overall, the event’s been great – really good conditions and apart from some small mistakes I’m happy. Two weeks before the first GP now so I’ll keep up the work and look forward to Matterley Basin.”