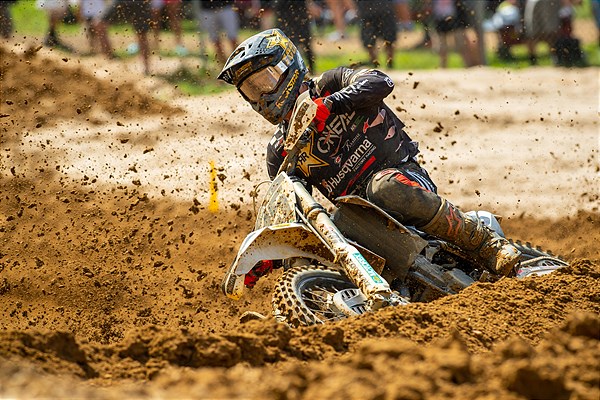 RJ Hampshire came into the weekend a little under the weather but the Round 4 overall winner quickly rose to the occasion as the gate dropped for 250MX Moto 1. Hampshire secured a top-five start and quickly charged up to the podium battle in third early on but he went down on lap six and dropped back to seventh. He gained momentum and worked his way up to fifth but another crash on the last lap gave him a ninth-place finish in the first moto. In Moto 2, Hampshire didn’t get the best start so he immediately began charging through the field and went down about three corners in. Starting in 15th at the end of lap one, Hampshire made a valiant charge through the field to ultimately capture an impressive sixth-place finish in the second moto.

“Tough day, I kind of struggled all week with energy and just didn’t feel well coming in,” Hampshire said. “I tried to do my best today – I had good speed but a few crashes ended up costing me pretty bad. We battled hard and had a big effort for the results, so I’m kind of bummed on that but I’ll move on and be ready for Indy.”

Jalek Swoll had a great start in Moto 1 as he charged into third right away on the opening lap. He battled in podium contention for the first few laps before getting overtaken by teammate Hampshire early on. In the end, Swoll maintained a strong pace to finish fifth. In Moto 2, he got tangled up with another rider off the start and lost substantial time getting back on-track but he was able to rally back for a 15th-place finish.

“The day started off pretty good and I felt really good on the bike, so I was pretty pleased heading into the racing portion,” Swoll said. “I was running in second for a while in Moto 1 and that’s obviously where we want to stay but we’re learning every time on the track and we’ll take a top-five. Second moto, I tangled off the start with another rider and that put me really deep in the pack and I was only able to come back to 15th. It’s a bummer, I feel like my riding has been pretty good and I’m ready to fight for these podiums but things just aren’t going my way and that’s racing, so we’ll take what we got and be ready for the next few rounds.”

Dean Wilson got off to a 12th place start in Moto 1 and he fought just outside the top-10 for the first few laps. After breaking into 10th on lap five, he continued to chip away and ultimately secured eighth. In Moto 2, Wilson went down in the first turn and he began the race at the back of the pack. Clawing his way up to 26th by the end of lap one, Wilson managed to put in a solid charge up to ninth. With 8-9 moto scores, Wilson earned his best overall finish of the season in eighth.

“My day was pretty good,” Wilson said. “The first moto wasn’t too bad, it was very hot and I kind of struggled with the first half and then I got a decent flow for the second half. Second moto, I fell in the first turn and I came from second-to-last up to ninth, so I was happy with that. I felt like I rode good and came through the pack well so we’ll take it, it’s building blocks and we’ll just try to get better every weekend.”