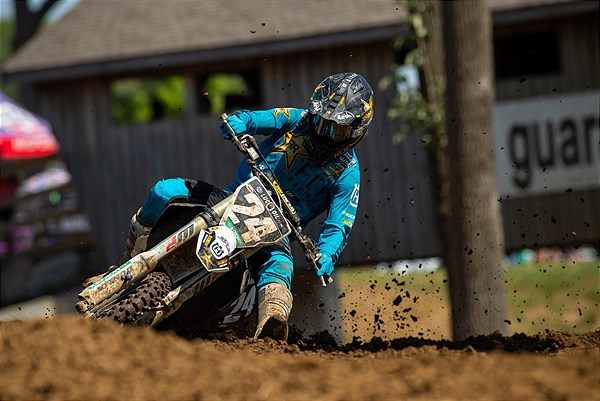 Rockstar Energy Husqvarna Factory Racing’s RJ Hampshire delivered another strong performance to come away with sixth overall at Round 10 of the 2021 AMA Pro Motocross Championship in Crawfordsville, Indiana. Highlighting his day with a strong second in Moto 2, Hampshire had an impressive comeback ride to claim 13th in Moto 1 after fighting through a first-turn pileup.

Beginning in a not-so-desirable 32nd position on the opening lap of Moto 1, Hampshire put his head down and charged to bring himself up to a respectable 13th. In Moto 2, he got off to a fifth-place start and quickly made his move into fourth two laps in. He made a mid-race charge to catch the podium battle ahead and after making the initial pass for third, he engaged in a back-and-forth battle for the next few laps before solidifying the position. He continued to charge in the final stretch to eventually overtake second, where he finished out the moto on the second step of the podium.

“It was quite the day and week but we showed up and gave it everything we had,”Hampshire said.“I’m a little bit bummed on the first moto but happy to get second in the second moto. We keep digging and we show up every weekend, so you know what you’re going to get from me. I’m going to recover this week and be back to my form at Pala.”

Jalek Swoll was unable to race on Saturday after injuring his shoulder during a practice crash earlier in the day. The Round 3 overall winner attempted the first-moto sight lap but his shoulder popped out of socket, causing him to make the tough decision to sit out the rest of the day.

“I was feeling really good and on the last lap, I had the bike sideways over one of the big triples and on the way down there was this weird freak incident and my feet came off the pegs and I just slid through the whole bike. I was trying to grab with my legs but it didn’t happen and I came down on the landing and had a big one,” Swoll said. “I tried to give the shoulder a go but it was just too weak from the impact on the first crash and kept popping out in the second qualifying. I tried to go out there for the first moto but it wasn’t worth the risk/reward for the day. We’re going to get it evaluated on Monday – I’m going to take my health seriously now and hopefully come back strong next year.”