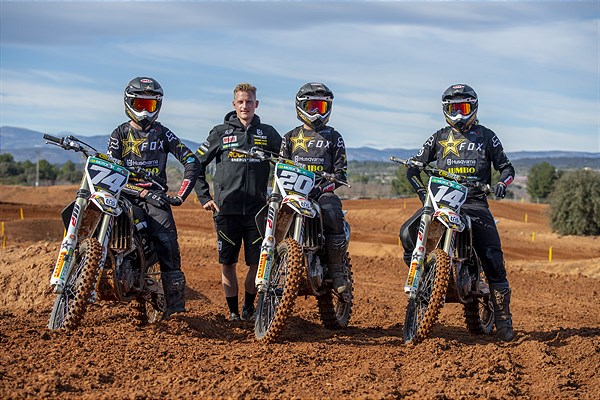 THE SEASON SO FAR WITH RASMUS JORGENSEN AND ANTTI PYRHÖNEN.

Following on from our pre-season interviews with Rockstar Energy Husqvarna Factory Racing’s team managers in the FIM Motocross World Championship, we caught up with Rasmus Jorgensen and Antti Pyrhönen to get their thoughts on the season so far and their expectations for the remaining rounds of the 2021 series…

Rasmus Jorgensen – Rockstar Energy Husqvarna Factory Racing MX2 Team Manager:“It feels strange that we are already in September yet we’re not even halfway through the season. Having said that, it’s been really nice to have more of a normal season with a variety of tracks. So far for Jed and Kay it’s been a really positive start with some great results. They’ve both been on the podium, Kay has won a moto, and they’re both well-placed in the championship. So overall, the season is going really well for the riders and the team.

“With Kay getting that win, that was not expected this season and he’s been doing an incredible job, both on the bike and off it. Our expectations for him have changed a little bit now, but keeping the same mindset remains. There is still a lot for him to learn and there may still be some mistakes along the way, but this is his rookie season and so far, he’s been very impressive. When he stood on the overall podium in The Netherlands with Jed, that was an amazing moment for the team. As both riders were on the box everyone was there, the mechanics, and the whole team from behind the scenes. That feeling is something that never gets old.

“We’ve just had a bit of a break in the schedule which has been nice as the riders and mechanics were able to enjoy some time away from the track and workshop after Latvia to recharge the batteries. As Jed and Kay are really happy with their bikes, that allowed us some time off as we didn’t need to test or develop anything. Now, we’re back and ready to go racing again. The riders have been on the podium many times this season so the goal from here onwards is to be consistently up front, keep posting solid results, and end the year strong. I’m excited to see what they can do in the second half of the season.”

Antti Pyrhönen – Rockstar Energy Husqvarna Factory Racing MXGP Team Manager:“The season so far has been good, despite the results not quite showing the full story. Arminas has been continuing to recover from his injury and has already shown glimpses of what he’s capable of many times this season. It’s an incredible story and the team is really proud of where he has come from to now be back in MXGP and working towards his old level. Step-by-step, he will get there with the progress that he’s making.

“For Thomas, it’s his rookie season in the MXGP class and so far, he’s experienced the highs and lows that come with a first season in a new class. In training, his ability and speed are really high, and now he just needs to bring that to race weekends and really show what he can do. With a compact race day with just a qualifying session before the races, everything needs to click early, and this is something we’ve been working on in recent weeks. That, along with improved starts should help them battle with the top guys consistently.

“They’ve both claimed results well inside the top-10 this season so they are very capable, it’s just finding that consistency and then they will show what they can do on a weekly basis. That will be the goal for the remaining rounds of the series. There are many races close together so being there in every moto will be really important. The potential from both riders is clearly there and now it’s over to them to bring their training speed to the races and show just what they can do.”

The 2021 FIM Motocross World Championship continues with round eight, the MXGP of Turkey, on September 5.