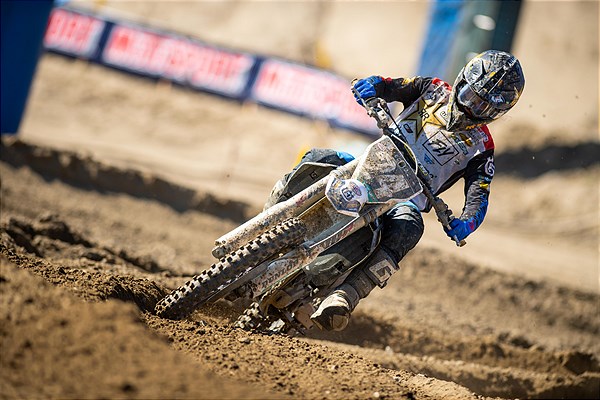 ANOTHER HARD-FOUGHT PERFORMANCE BY RJ HAMPSHIRE AT PRO MOTOCROSS ROUND 11.

It was an unfavorably hot day in Southern California for Round 11 of the AMA Pro Motocross Championship but Rockstar Energy Husqvarna Factory Racing teammates RJ Hampshire and Joshua Varize rallied through to capture top-10 overall finishes in the 250MX class. Highlighting the team’s effort was a third-place podium finish from Hampshire in the first moto, followed up by a career-best eighth overall from the team’s newest addition of Varize.

Hampshire got off to a fourth-place start in Moto 1, quickly making the move into third three laps in. About halfway through, Hampshire was able to capitalize on another rider’s mistake and move into second, where he rode smooth and without challengers until the last few laps. Exhausted and struggling to fight through the 100+ degree heat late in the race, Hampshire brought it in for a solid third.

Still feeling drained by the start of Moto 2, Hampshire ended up getting tangled with another rider off the start, forcing him to start from dead last. Making his way up to 16th by the sixth lap, he pushed as hard as he could but was only able to reach 14th by the time he crossed the finish.

“It was a pretty rough day,”Hampshire said.“I had a good start first moto and kind of put everything I had into it. I ended up on the box but I was pretty drained after that. I tried to recover best I could for second moto but I got tangled right off the start and was dead last. The bike was tweaked up a bit and 14th was all I had. It’s been a tough go but we have one round left to try and finish this thing off good.”

In his first race as the team’s fill-in rider, Varize had an impressive day all around, earning career-first top-10s in both of the motos and the overall result. In Moto 1, Varize had a great jump off of the line and he assumed the fifth-place position for several laps. He put in a strong ride mixing it up with the front-runners early on before going on to secure a career-best ninth in the first moto.

In Moto 2, Varize once again launched off the start to give himself a solid fifth-place start. Fending off pressure from class veterans early on, the young rider held his own to once again to secure a solid top-10 finish in ninth.

“My first day with the team was amazing, really no complaints here,”Varize said.“I’m super stoked on how the day went, I finally got into the top-10, which is what I’ve been pushing for. My Rockstar Energy Husqvarna machine was ripping today and I’m really stoked to go back this week, get some testing done and be ready for Hangtown.”