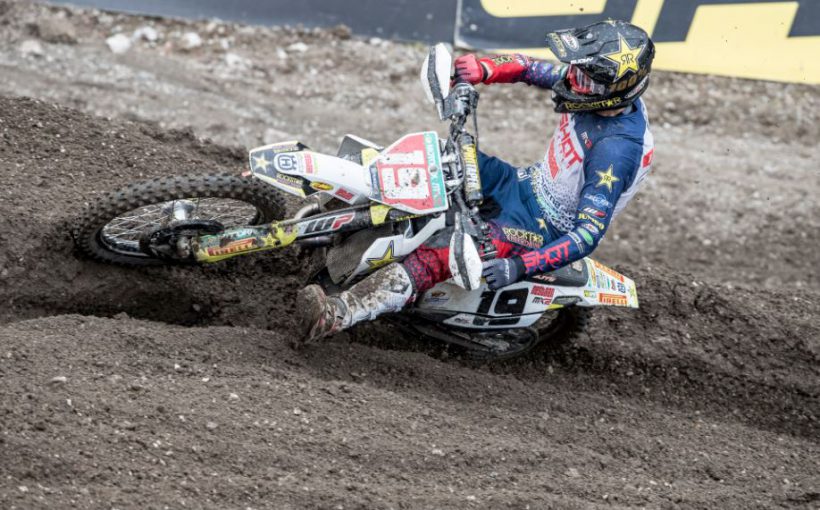 Ahead of the five-week break in the 2019 FIM Motocross World Championship, Rockstar Energy Husqvarna Factory Racing’s Thomas Kjer-Olsen has maintained his overall lead in the MX2 World Championship standings following a tough MXGP of Trentino, Italy. Fifth overall on the day, Kjer-Olsen finished fifth in moto one and fourth in moto two. In the MXGP class Arminas Jasikonis delivered the best result for Rockstar Energy Husqvarna placing sixth overall, moving up into fourth in the MXGP series standings.

Despite not finishing on the podium at round four of the MX2 World Championship, Thomas Kjer-Olsen nevertheless battled hard throughout both motos in northern Italy on his FC 250. Finishing fifth in the opening race, having completed the opening lap in the same position, TKO was forced to give his all following a mistake on lap two that dropped him to 10th. Falling further back on lap three, he then doggedly pursued the group of riders ahead of him to eventually move into seventh on lap eight. Continuing to move forwards he jumped up to his eventual finishing position of fifth.

In the second moto Kjer-Olsen again completed the opening lap in fifth, holding that position for eight laps. Reaching as high as third, which he held for seven laps, he eventually completed the moto in fourth. Finishing 12th overall Jed Beaton placed just outside the top 10 in each moto in 12th and 13th following less than perfect starts.

In the MXGP category, Rockstar Energy Husqvarna Factory Racing’s Arminas Jasikonis moved into an impressive fourth overall in the MXGP championship standings following another consistent GP performance. Although not a huge fan of the slippery Trentino circuit, the Rockstar Energy Husqvarna Factory Racing rider ended the event with ninth and fifth place results.

With overtaking notoriously difficult around the slippery circuit, Jasikonis rode well in the opening moto but could move no higher than ninth, spending the entire second half of the moto just inside the top 10. Race two proved to be better for the FC 450 rider, who finished fifth to claim a well-deserved sixth overall.

An 11th place result in today’s opening MXGP moto was the highlight of round four of the MXGP World Championship for Pauls Jonass, who finished a strong seventh in his qualifying race. Starting inside the top eight in the first moto, a mistake while trying to make a pass saw him drop back to 11th. In the second moto a poor start and a fall pushed the former MX2 World Champion back to an eventual 19th place finish.

The Rockstar Energy Husqvarna Factory Racing team now enjoy a five-week break from racing, returning to competition at round five of the 2019 FIM Motocross World Championship in Italy, the MXGP of Lombardia on May 12.

Thomas Kjer-Olsen:“It’s not been the perfect weekend here, but I’m still leading the MX2 championship and I think I showed some good speed. Everyone knows this track is really difficult to pass on and I experienced that in the first moto. The second race was better, but after running third for so many laps it’s tough not getting a top three result. But finishing 5-4 gives me good championship points. I’ll keep working hard during the weeks off to be 100% ready for the next GP.”

Jed Beaton:“I feel like it’s been an ok weekend for me. Things started off a little slow on Saturday and certainly not how I wanted it to go. But Sunday was much better. Two poor starts held me back in both motos though. I felt like my riding was good, but I have to get out the gate better. We have a good break now in the championship, so it gives me plenty of time to keep working and to focus on improving ahead of the re-start of the series.”

Arminas Jasikonis:“To come away from this GP sixth overall and now also up to fourth in the championship is great. It’s certainly not one of my favourite tracks, being so slippery and hard to pass makes it really difficult, so I’m really happy with my results, and also my riding this weekend. In the first race it was just difficult for me to make passes. I managed to improve a few places during the early laps, my riding was ok, but once I got into ninth I couldn’t get any further ahead. Not the best result but also not a disaster. The second race was better. I was further ahead from the start but again it was tough to make passes. But it was a good way to finish the GP. So far things have been very positive – I’ve finished inside the top 10 in all motos we’ve had. Some results have been better than others, but the consistency has been there, which is good. There’s still a long way to go but fourth in the championship is very positive.”

Pauls Jonass:“I guess it’s been a mixed weekend for me, not really what I’d hoped for. Timed training and my qualification race went well, but today’s races weren’t what I’d hoped for. I got a pretty good start in the opening race but then I made a mistake trying to pass Shaun Simpson. It’s hard to pass here so I got 11th. I didn’t get a great start in the second moto and then I fell, so that was that really. I wanted to be inside the top 10 but I couldn’t make it happen in race two. In terms of results, or course I want more, to be finishing higher. But if I take the positives from these first GPs in the MXGP class it’s that I’ve learned a lot. I will work hard during the break we have now and push hard to make the next steps in the MXGP class.”

Championship Standings – After Round 4