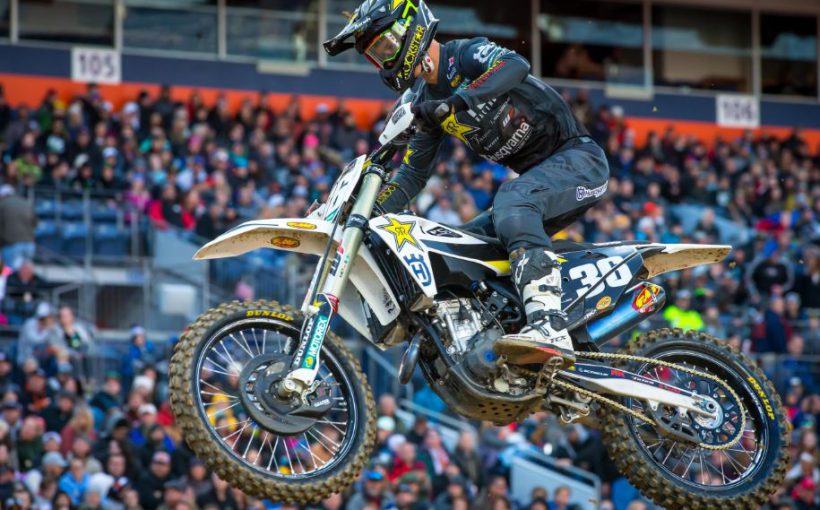 The Rockstar Energy Husqvarna Factory Racing Team descended upon Broncos Stadium MileHigh in Denver, Colorado on Saturday for Round 15 of the 2019 AMA Supercross World Championship. Temperatures were unusually cold with snowfall taking place earlier in the day but conditions shaped up for the night show as team rider Michael Mosiman shined bright with a top performance in the 250SX West Main Event.

Mosiman qualified fifth earlier in the day, where he lined up for 250SX Heat 2. He got off to a fourth-place start aboard his FC 250 and he maintained a solid pace to claim a fourth-place transfer into the Main Event. In the 250SX Main Event, Mosiman powered his way to the holeshot and assumed the early lead. He maintained the top position for the first six laps before engaging in an exciting back-and-forth battle for the lead on lap seven. Mosiman eventually settled into second and continued to battle for a podium position for a majority of the race. Mosiman went down late in the race and consequently dropped to fifth, where he captured a top-five finish with an incredible performance in the Main Event.

“I was able to get off to good starts tonight and I think that’s what has really changed for me this second half of the season,” Mosiman said. “To be able to get out front and lead some laps felt really good and was a huge confidence booster. It was a big-time learning experience and I was able to cherish the moment and stay relaxed throughout the race.”

450SX
It was an all-around positive day for Zach Osborne, who started things off with a sixth-place qualifying position. He lined up in 450SX Heat 1 where got off to a third-place start aboard his FC 450 before charging his way to a second-place transfer into the Main Event. In the Main, Osborne got off to a seventh-place start and he worked his way into sixth by lap three. He bounced around inside the top-ten for the remainder of the race where he ultimately secured eighth for the night.

“The heat race was really positive for me, I was able to get second and I felt like I had the speed to win but just wasn’t really executing,” Osborne said. “In the Main Event, I got off to a decent start and was in position to really charge for a podium but the second half of my Main I had a hard time getting back into the flow after the red cross flag came out.”

Wilson had a great start to the day, qualifying fourth overall in the 450SX division. He went on to line up alongside his teammate, Osborne, in 450SX Heat 1 where he powered his FC 450 into sixth on the opening lap. Wilson battled just outside the top-five throughout the heat as he locked in a direct sixth-place transfer into the Main. Wilson got off to a top-ten start in the Main Event where he battled in the eighth-place position early on. Eight laps in, Wilson had a big crash through a rhythm section that ultimately ended his race early. As of Saturday evening, Wilson is at the hospital getting evaluated.