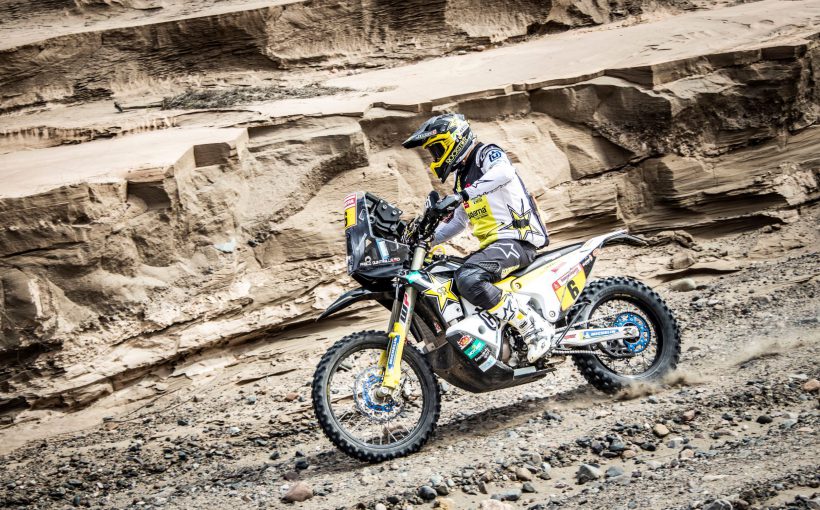 Pablo Quintanilla has delivered the goods on Wednesday’s stage three of the Dakar Rally. Securing a close runner-up result on the day’s timed special stage, the Rockstar Energy Husqvarna Factory Racing rider is now the rally’s provisional overall leader with three out of 10 stages contested in Peru.

Featuring a mixture of dune riding and some mountain passes, stage three of this year’s Dakar was highly positive for the Rockstar Energy Husqvarna Factory Racing team. Putting his experience to good use, Pablo Quintanilla enjoyed a mistake free stage to cross the line with the second fastest time of the day. In a total time of more than four hours, Pablo was just 15 seconds slower than the stage winner. The Chilean rider now holds an 11-minute lead at the top of the rally’s overall standings.

Battling through a tough stage, Andrew Short retains his position inside the top 10 in the provisional overall standings. Bringing his FR 450 Rally machine safely to the end of the tough stage, Andrew claimed a 12th place result on stage three of the rally.

Thursday’s stage five of this year’s Dakar is also the first part of the two-day long marathon stage. It features a 405km timed special stage in a total distance of 511km. The stage will bring competitors to the Moquegua bivouac where they will have to prepare their machines for the next day without any external assistance.

Pablo Quintanilla: “The real Dakar has just started and I’m happy with where I’m at right now. Today we had a difficult stage. There was a lot of fog and in some parts you couldn’t see far ahead. If you tried to push, you ended up missing the right tracks. I took my time there and rode really carefully. At one crucial point in the mountains I made the right decision and gained some time to my rivals. Navigation today was really tricky. I’m having fun on my bike at the moment and I want to keep that same momentum going for the stages to come.”

Andrew Short: “It was a tough day for me but I’m still in the race and that’s what matters the most. I had two crashes in the opening part of the stage and that cost me some time. Conditions were tough, it was foggy and you could hardly see in front of your fender. I was lucky to escape those crashes unharmed and I went on to finish the stage. Today there were many direction changes and navigation was tricky. Together with most of the first riders, we got lost searching for a tricky waypoint and that cost us all some more time. The race is proving to be quite tough and I’m now focusing on the stages to come.”