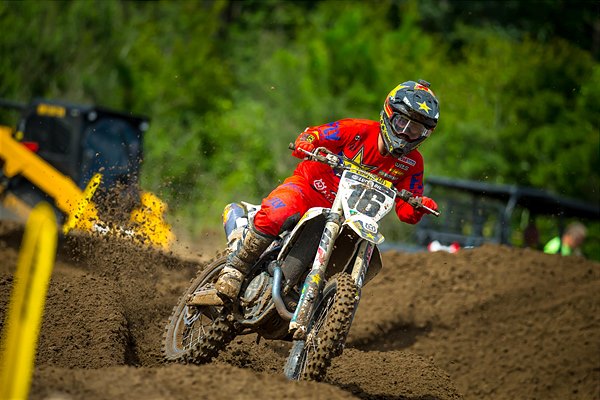 ANDERSON FOLLOWS UP IN FOURTH OVERALL.

The 2019 AMA Pro Motocross Championship made its first-ever stop at the WW Ranch Motocross Park in Jacksonville, Florida for Round 5 of the 12-round series on Saturday. Rockstar Energy Husqvarna Factory Racing’s Zach Osborne highlighted the team’s efforts with a hard-fought third-overall in the 450MX class; while his teammate, Jason Anderson, finished just off the podium in fourth. In the 250MX class, Michael Mosiman once again put forth an impressive performance to finish fourth overall in the class.

450MX
Osborne started off the day well by securing a fourth-place qualifying position. In Moto 1, he got off to a good start aboard his FC 450 to begin the race in fifth. He charged hard behind his teammate and the duo eventually worked their way up to the podium battle. On lap nine, Osborne went down and lost some momentum, dropping back to sixth but he fought his way back to reclaim fifth late in the race. In Moto 2, he got off to a second-place start and battled early on with Anderson before settling into fourth. As the race wore on, Osborne only got stronger as he bought himself within striking distance of the second-place rider late in the race. With three laps to go, Osborne passed Marvin Musquin for second and he charged his way to the finish.

“We made some changes in the week after High Point and it really paid off today,”Osborne said.“I was able to ride much more in my comfort zone during the whole moto, which gave me more at the end. I had a pretty big get-off in the first moto and was only able to manage fifth but in the second moto I had a really good feeling and momentum and I was able to really go out there and show what I can do.”

Anderson, who came just shy of landing on the overall podium, claimed pole position for the second-straight round with an impressive charge in qualifying. In Moto 1, he got off to a top-five start, positioning himself in fourth early on. He charged his way around the outside to overtake third with three laps to go, where he made a last-minute attempt to go after second-place. With a hard-fought performance, Anderson ultimately finished third in the first moto. In Moto 2, he began in third and quickly charged his way past his teammate and into second-place early on. Anderson and Osborne continued to battle throughout the race, with Anderson ultimately finishing fourth in the race.

“The weekend went alright,” Anderson said.“I had a good practice and was able to be P1 but it was a hot day here. The second moto, I was in position to have a good overall and possibly get up to the lead and the heat got to me a little bit and I kind of went backwards.”

250MX
Michael Mosiman had another great day of racing in the 250MX class, finishing just off the podium with fourth overall for the day. In Moto 1, he powered his FC 250 to a top-five start, where he battled within the lead pack early on. Just after the halfway point, he made a pass for third and he rode strong to secure third-place in Moto 1. In Moto 2, he got off to another great start as he positioned himself in third on the opening lap. He battled inside the top-five for the rest of the race, ultimately finishing fifth in the moto.

“This was definitely the toughest race of the year,”Mosiman said.“I’ve been saying it all along – if I can get a start, I can run with those guys and I got two good starts today! I was up there both motos at the beginning and I tried to save energy but those guys are going so fast and to maintain that pace, you’re pushing pretty good. Overall, I’m happy with my fitness and pleased with the day.”

It was a solid day for Jordan Bailey, who finished 11th overall with 10-12 finishes in his home state of Florida. Following a couple of tough rounds, Bailey was able to bounce back and put himself into a good position in Moto 1 with a solid seventh-place start. He battled around the top-10 for a majority of the race, where he ultimately secured 10th in the first moto. In Moto 2, Bailey began just outside the top-15 and quickly worked his way into the top-10 by lap four. From there, he bounced around a few positions before settling into 12th for the race.

“It was a good day,”Bailey said.“It was extremely hot and we needed to be a little stronger that’s for sure, but it was a step in the right direction. I’m happy with what I’m doing off the bike and I just look forward to improving at Southwick and keeping this ball rolling.”