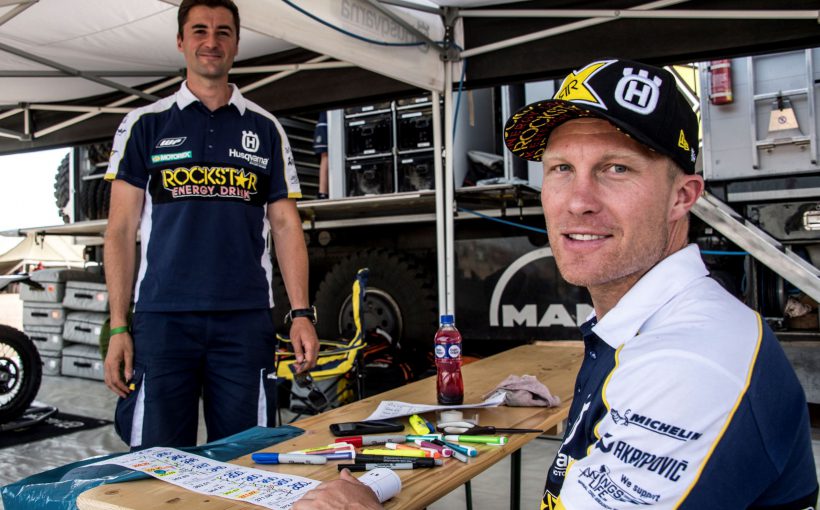 Stage seven of the 2019 Silk Way Rally was made up purely of a liaison section between Dalanzadgad in Mongolia and Bayinbaolige in China. With teams completing the 550.66 kilometres between the two bivouacs, riders were given a rest day with no racing against the clock.

Currently fourth in the overall standings, Andrew Short has proven that maintaining a solid pace throughout the rally has paid off. Initially out of his comfort zone in the first few stages of the event where average speeds were extremely high, the American rider has stayed focused throughout and as his confidence has grown, so has his pace.

With a number of top-five finishes, Short has shown he can take the fight to the more experienced riders in the championship. Making the most of his maturity and accurate navigation, Andrew has made the very minimum of mistakes to turn in creditable stage times at the end of every day.

Now, with three stages left to contest, the Rockstar Energy Husqvarna Factory Racing team are aiming for strong results in each of the Gobi Desert timed specials and to top the event off with a solid finish. Stage eight of the rally, the longest of the event, will cover a total of 785.11 kilometres, of which 326.6 are timed special, in the tall dunes of the Gobi Desert, China.

Andrew Short:“So far this event has been really impressive in terms of the organisation and from a professional standpoint on how they have put the race together. The route has been really diverse – every stage has been really quite different. Russia was a lot different to Mongolia and now driving into China, it looks like a completely new desert with lots of varied terrain. I am excited for the next few days, they look like they are going to be the toughest days, the longest and the most challenging. I’m happy with my riding and navigation, I haven’t had too many issues over the course of the rally so far. The pace has been quite high but I think that will change now we’re going to be riding through the desert – navigation is going to be really important. We’ll see how the race develops and then closes at the end.”

Pela Renet (Rockstar Energy Husqvarna Factory Racing Rally Team Manager):“When we came into the rally, I don’t think we were expecting such a well organised event. The race is very big and everything has been handled professionally, it’s really very impressive. Looking at the racing side and Andrew, he is looking very good and we still have three days to go. It’s been a tough event so far with very fast stages. Navigation up until now has not been too tricky, but that may change over these next few days. I think the first stages were at a really fast pace and took Andrew a little time to get used to that. But his confidence has been growing and he has put in some really fast stage times. With three days left to go, the whole team will continue to give our best right until the end.”