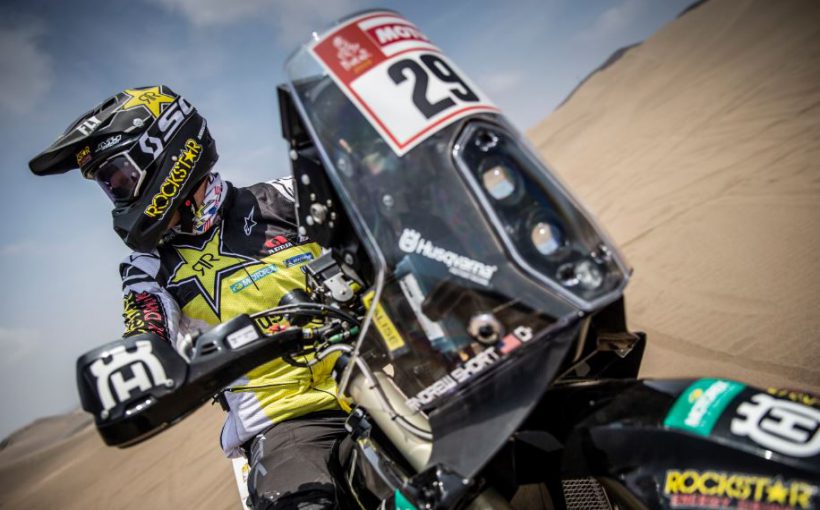 Rockstar Energy Husqvarna Factory Racing’s Andrew Short has earned an impressive top-five result on stage five of the 2019 Dakar Rally – the American’s second participation in the world’s most demanding rally. Following a well-calculated plan of attack, Pablo Quintanilla claimed a 13th place result and is very well placed ahead of Sunday’s stage six.

The two Rockstar Energy Husqvarna Factory Racing riders had the chance to race alongside one another for much of the day’s timed special stage. Remaining fast from start to finish, Andrew Short claimed his best individual stage result of this Dakar. Finishing fifth on stage five, he bettered his strong sixth place result from stage 10 of the 2018 Dakar. His top five result on Friday allows Andrew to move back inside the top 10 of the overall standings.

On Saturday, all competitors will enjoy a well-deserved day of rest in Arequipa. During the rest day, Pablo and Andrew will be able to prepare themselves for the second week of racing in Peru.

Pablo Quintanilla: “Five days done and I’m in a great position in this rally. The first part of the stage was a lot of fun. I took the lead after the mass start, but then decided to stay off the gas a bit. My eyes are focused on the overall classification and I’m in a good spot to attack during the second week. Today I felt great on my bike. I was able to get a good pace and do my own race. The Dakar is always a long event and you need to always see the overall picture. I’m happy with my performance today because I’ve managed to put myself in a great position for Sunday’s stage six. I am feeling great physically and I’m looking forward to the second week. It’s important to get back as much time as possible on Sunday so that I can then control my pace for the rest of the race.”

Andrew Short: “I had a better day today. It was really fun to ride with Pablo pretty much all day. The mass start was huge fun, especially for a guy like me coming from motocross. From the beach we went to the big dunes. It was really steep and we were going up and down all the time. That part was really fun to ride. Overall, it was a good day for me and Pablo and hopefully as we continue we can keep getting better. When I have someone like Pablo who I can trust, it’s a lot easier for me to ride fast. The more I ride with the top guys the better I can get. I am getting more experience and I hope I can keep improving during the second week of racing.”