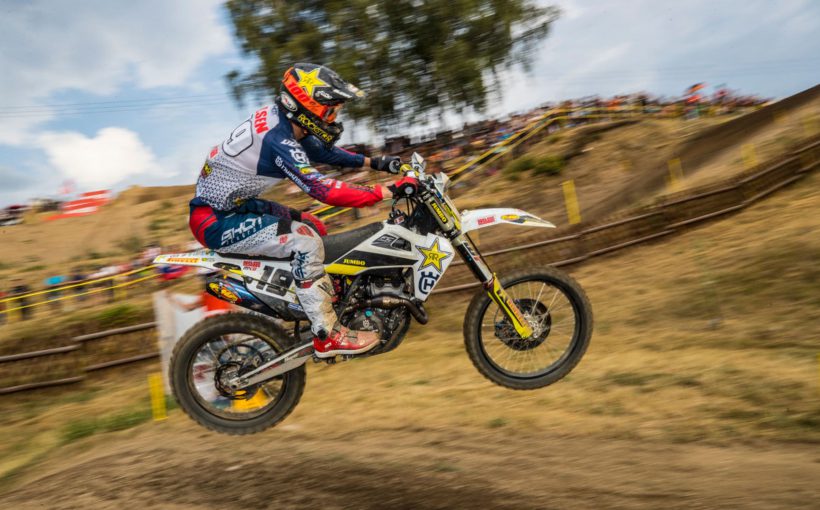 THOMAS KJER OLSEN ON THE PODIUM AT MXGP OF CZECH REPUBLIC.

Showing no ill-effects of the first turn crash that brought his GP of Asia (Indonesia) to a premature end, Thomas Kjer Olsen delivered impressive form around the Loket circuit to bounce back onto the overall MX2 class podium thanks to 3/4 results. Unable to train as he’d have liked during the days leading up to the Czech GP, Kjer Olsen nevertheless put in two strong motos to secure his 10th podium result of the season to date.

Lacking a little intensity at the start of the opening race, Thomas increased his pace to move into fifth on lap five. Not wanting to overstep his mark and get caught out by the demanding track, the FC 250 rider was gifted third position when Tom Vialle and Calvin Vlaanderen crashed ahead of him. Moving into third with six laps remaining, Thomas maintained a manageable pace to finish third.

Race two started in much the same way as race one for Kjer Olsen as he impressively sneaked his way around the first turn. Sixth at the end of the first lap, it wasn’t until lap nine that he moved forward and into fifth. Making up one more position to claim fourth at the chequered flag, Thomas edged out Adam Sterry for a place on the overall podium in third.

Continuing his recent good form, Jed Beaton also put in two strong MX2 motos at the Czech GP. Seventh at the start of race one, like teammate Kjer Olsen, Beaton was able to benefit from the coming together of Vialle and Vlaanderen and jumped from sixth to fourth on lap 12, holding fourth to the finish. A little further down the field at the end of the opening lap in the second moto, Beaton worked hard throughout the race to improve from 13th to his eventual finishing position of ninth.

The MXGP of Czech Republic was also a positive one for Rockstar Energy Husqvarna’s MXGP pairing of Pauls Jonass and Arminas Jasikonis, as both riders finished inside the top seven overall.

It was Jasikonis who, despite being made to work extremely hard during his qualifying moto after getting caught up in a first turn pile-up, claimed the best result in the opening MXGP race in fifth. Putting in a number of important passes during the opening lap, AJ spent just two laps in sixth before moving into fifth. Consistently clocking off the laps, during the closing stages of the race he was glued to the back of Gauthier Paulin but was unable to make the pass for fourth and eventually crossed the finish line just 1.2 seconds behind the Frenchman.

In following teammate Arminas Jasikonis across the finish line at the end of the opening MXGP moto, Pauls Jonass opened his GP with a strong sixth-place result. Eighth at the end of the first lap he moved into seventh on lap three and then into his eventual finishing position of sixth on lap six. Finishing seventh in moto two, for sixth overall, Jonass didn’t quite have the pace he had in the first race and opted not to push too hard around the often unpredictable Loket track.

In the EMX 125 class Mattia Guadagnani missed the podium by just one position to finish fourth after topping the day’s opening moto and then placing 13th in race two. Kay de Wolf placed 11th overall.

The Rockstar Energy Husqvarna Factory Racing team will next be in action at round 14 of the FIM Motocross World Championship, the MXGP of Belgium, on August 4.

Thomas Kjer Olsen:“Considering how the last GP ended for me, to finish third overall here at Loket is awesome. I knew things would be tough for me, and that I’d maybe lack a little intensity having not been able to train and ride that much the last week, but I’m pleased with the way things came together for me. I didn’t get the best start in the first race but sneaked around the first turn and was in a pretty good position. It took me a while to get into fifth and I didn’t want to push too hard on this track. When Vialle and Vlaanderen went down it helped me a lot. I just tried to be smooth in the second race and do my best. I found the track pretty tough but kept pushing. Getting an overall podium result is a great way to start the final European GPs of the season.”

Jed Beaton:“It’s been a good weekend for me, especially the first moto. I got a decent start and was in around third or fourth coming out of the first turn, but some wheel spin dropped me back a few spots. I had a pretty good moto after that, following Thomas. Obviously, when Vialle and Vlaanderen went down it helped both of us, it was good to get fourth. My start wasn’t so good in the second moto and it was hard to make passes. I lost some time behind a few riders, so I wasn’t able to get as far forward as I wanted. But it’s been a solid weekend and I’m up to seventh now in the championship. I just need to focus on good point scoring finishes in both motos at each of the remaining GPs now, starting in Lommel next weekend.”

Pauls Jonass:“I guess I can say it’s been a decent GP for me – certainly not the worst, but also not the best. I had hoped to get better results coming back to Europe, but it’s like this. It’s good championship points, and sixth is a good overall result. Starts are so important here and I didn’t get the best of starts in either race. But I felt good in the first race and managed to make a few passes and, yeah, sixth was a good result. My pace wasn’t quite what I needed in the second moto. I felt ok, but I didn’t want to push too hard and take risks. Riding here is very different on a 450, but I enjoyed the GP. There aren’t too many races to go now, so the focus is to keep working and try and improve my position in the championship.”

Arminas Jasikonis:“I’m pleased with the way the weekend has gone. It didn’t start in the best way when I got caught up in the first turn crash in the qualification race. But I rode well to come from almost last to 10th. I really pushed hard and was feeling good coming into today’s races. My start wasn’t the best in the first race, but I felt like I made some good passes during the early laps and kept a good pace going throughout the race. I was behind Paulin during the last laps but couldn’t find a way pass and didn’t want to take risks. Fifth was a really good result. The second moto went pretty well but I felt like I wasn’t quite flowing with the track like I needed. Seventh overall is a big step in the right direction after the last few GPs and I’m really looking forward to Lommel now.”