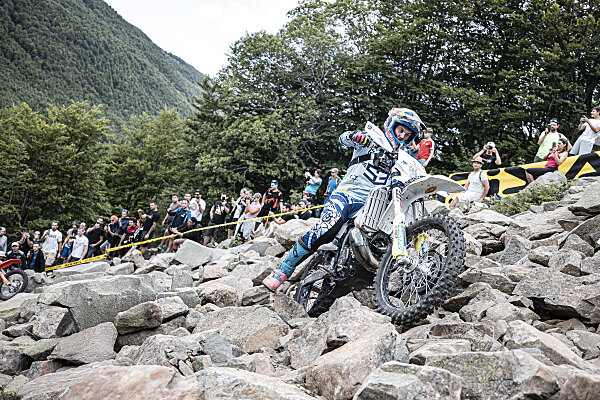 Maintaining his championship lead, Husqvarna Factory Racing’s Billy Bolt has put in a determined ride at the fourth stop of the FIM Hard Enduro World Championship in Italy to finish as runner-up. Winner of the newly-formed Red Bull Abestone in 2021, Bolt was excited to return to the Tuscany mountain peaks in Italy to do battle again.

Finishing fourth last time out at Red Bull Erzbergrodeo, the TE 300 mounted rider knew he needed another strong result as the championship reached its halfway point. Staged over two days, Red Bull Abestone opened with a series of qualifications on Saturday, which saw Bolt on top form.

During the morning’s enduro special tests, Billy was setting the pace. Enjoying the fast-paced terrain, he pushed hard to put his name at the top of the standings. Fastest in each of the tests, he took a commanding 45-second margin of victory heading into the evening’s straight rhythm shootout. Fighting his way through a series of knockout heats, the Husqvarna rider easily reached the final, before winning that to end his day as the top qualifier.

For Sunday’s feature two-lap race, Bolt held prime position by starting first. And with riders flagged away in 30-second intervals, he was determined to use that leverage to his advantage. Feeling fresh, Billy pushed hard early on to open up a lead on his rivals. Knowing that his ongoing wrist injury would hinder him on the downhills, Bolt used his trial skills to good effect on the technical rock gardens and held the race lead for over 45 minutes.

Slipping to second midway through lap one, he hung onto leader Manuel Lettenbichler for as long as possible, opening up a healthy margin over third place. Controlling that as best he could, Billy ultimately crossed the finish line as runner-up. The result sees him successfully maintain his lead at the top of the championship standings.

Billy Bolt:“That was a hard race for sure. We knew the course would be difficult, but doing two laps made it even tougher. I’m pleased with second place though. Kicking things off by winning the qualification and straight rhythm was nice. I always enjoy those race formats and qualifying first put me in a strong position for Sunday. Starting out first I knew it was a good opportunity to make some time on a clear track. But with my wrist injury it was hard to hang on during the downhill sections and I just couldn’t push the pace I wanted. When Mani came past, I made a small mistake and lost touch with him. He pulled away a bit and I pulled a gap on third place, so the final lap was about trying to manage that and bring it home safe.”