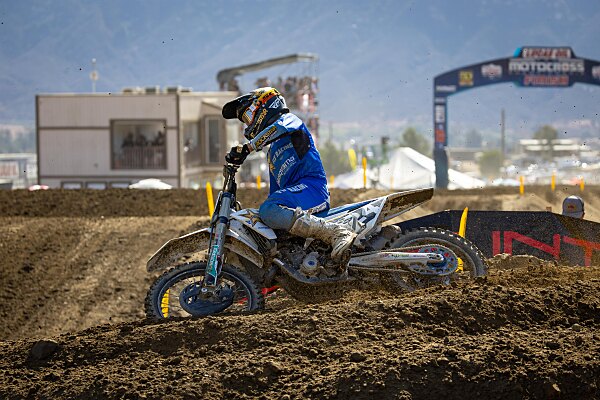 HAMPSHIRE CLOSES OUT 2022 AMA PRO MOTOCROSS SEASON WITH A TOP-FIVE FINISH IN CALIFORNIA.

Celebrating the long tradition of Husqvarna Motorcycles competing at the highest level of motocross racing in the U.S., the Rockstar Energy Husqvarna Factory Racing Team came into the Fox Raceway II National adorned with a unique look aboard their FC machines. Hampshire’s vintage look was a welcomed sight on the 250X gate drop as he concluded the 2022 AMA Pro Motocross Championship season with a top-five overall in Pala, California.

Hampshire, a race one podium finisher at the first Fox Raceway National, didn’t get off to the best start in Moto 1 and he started the opening lap back in 14th. In true fashion, Hampshire chipped away throughout the race to ultimately dig his way up to seventh. In Moto 2, he started inside the top-10 and quickly worked his way into fifth. Battling the heat, Hampshire pushed late in the race to overtake one more spot for fourth. Scoring 7-4 moto finishes, he ended the season on a positive note with fifth overall.

“It was hot today,” Hampshire said.“I kind of struggled all day. I qualified decent, but my first moto start was not great at all. I was probably outside of the top-20. I rode decent but I was just kind of saving myself a bit there because the heat was hitting pretty hard. Second moto was a little bit better of a start and I rode decent, making it up to fourth. I’m looking forward to the off-season. Through all the challenges we’ve dealt with this year, it was good to kind of end it there on a high note. Looking forward to next year.”

Jalek Swoll found himself battling the tough conditions all day long, ultimately coming away with 13-18 moto scores and 16th overall on the day.

“It was a very, very tough day,” Swoll said.“Not good starts on a really one-lined track, which made the day really tough. The first moto wasn’t very good. Second moto, I had a fall and that was kind of all she wrote. It is what it is and I’m excited to get into this off-season and sharpen the tools to come out firing for next year.”

In just his third AMA Pro Motocross appearance, Talon Hawkins finished the series strong and inside the top-20 at one of the most challenging events of the year.

“My day was pretty good,” Hawkins said.“I just tried to come into this with a positive attitude and I knew it was going to be a hot one. I did the best I could trying to prepare for it. Obviously, everybody struggled and that’s just part of it. I had a really good day – a lot of improvements – and there’s lots of positives to take away from today. My 18-14 scores don’t look too good on paper but it’s improvement and I’m excited to get back to training and get back to grinding.”

Announcing his last career AMA Pro Motocross race at the 12th round, Dean Wilson closed out a successful career on a positive note with a top-10 overall finish in the 450MX class. Coming through the pack in both motos, Wilson put forth a valiant effort amidst the intense heat to earn 13-9 moto finishes on the day. The Rockstar Energy Husqvarna Factory Racing team thanks Dean Wilson for a great relationship over the years and wishes him the best in his next chapter.

“My day was alright,”Wilson said.“My goal was to be top-10 in both motos and unfortunately, a second corner pile-up was not ideal. I had to come from the back to 13th again. Second moto, I had another bad start and had to come through to ninth. It wasn’t great, but it was my last American Pro Motocross moto of my career and it was a hot one! I won’t forget this one, that’s for sure. The track was gnarly. I’m very grateful to the team for being behind me these six years. I’m happy to be safe and to now focus on Motocross of Nations.”

Coming in for the tail-end of the series after not having raced this track since 2011, Malcolm Stewart had his work cut out for him at Fox Raceway but he lined ready for the battle. Unfortunately, Stewart got caught up in a first-corner incident in the first moto and wasn’t able to continue on for the rest of the day due to a burn sustained in the crash.

“Not really what I wanted to end with but at least we’re getting out of here safely,” Stewart said.“I haven’t raced Pala since 2011. In the first turn of the first moto, some riders got collected and I got hit from behind pretty hard and got a pretty good burn on me. I felt like the best opportunity was not to go back out for the second moto. It’s pretty bad and we just needed to be smart. I think the overall, the goal was to get back racing and get a couple of races under my belt. Of course, the last four race results haven’t been the way we wanted, but I think it was more than just results for us. It was really about gate drops and just being sharp. We’re going to try to enjoy the off-season and we’ll be back riding Supercross and getting ready for 2023 and just have fun with it.”

The special livery paid tribute to the rich history Husqvarna Motorcycles has written in America which began in the 1960s. Back then, Swedish racer Torsten Hallman not only won multiple national races aboard his Husqvarna machine to lay a strong foundation for the brand, but he played a vital role in introducing the exciting sport of motocross to the USA.

Further information relating to the vintage color scheme and availability of our offroad and motocross lineup will be released in September.