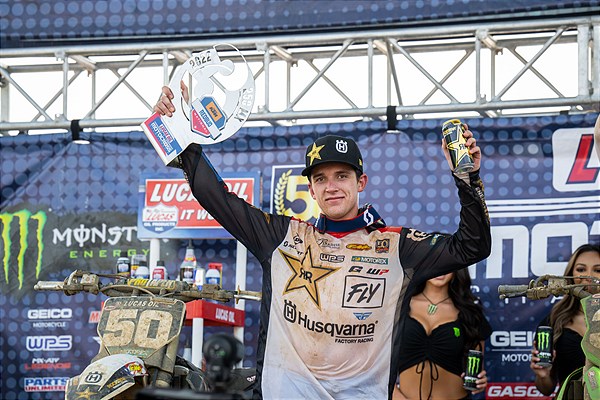 HAMPSHIRE CLAIMS A HARD-FOUGHT FOURTH AT ROUND 5.

It was a career-best 250MX performance for Rockstar Energy Husqvarna Factory Racing’s Stilez Robertson, who put in an astounding ride for third overall at the RedBud National in Buchanan, Michigan. With 3-5 moto scores, Robertson earned both his first moto-podium and overall-podium in the AMA Pro Motocross Championship, edging out his teammate, RJ Hampshire, who finished fourth overall with 4-6 results at the fifth round.

Robertson was smooth and steady throughout the day. In Moto 1, he powered his FC 250 off the line to immediately join the leaders up front. Robertson continued to push hard and trail the top-three for the first half of the moto and holding firm in fourth, he pushed hard for a podium spot. He seized the opportunity around the halfway mark and shifted up into third, where he eventually took the checkered flag. In Moto 2, he quickly grabbed fourth off the start and within another lap he made his way into third. It wasn’t long before he encountered intense pressure from behind and ended up shuffling back to fifth. While trying to regain spots, he lost traction and went down on the face of a jump, which dropped him even further back to eighth halfway through the race. Climbing back up to fifth, Robertson was able to secure a top-five moto finish to ultimately claim a career-best third overall at RedBud.

“RedBud was a good day,” Robertson said. “I just wanted to have two good motos today and we did. We got two good starts as well, so I’m super stoked and just want to keep it going. It was a really fun day and can’t wait to get to Southwick and do it again. Just keep trying to do my best and keep trying to ride like I do during the week, and I think we’ll be okay.”

In only his second race back since an injury at Round 2, Hampshire had a promising start to the day, qualifying seventh. However, with a mid-pack start in Moto 1, Hampshire had his work cut out for him early on. He was able to climb up to eighth within a few laps and he continued to pick off riders one-by-one, positioning himself in fourth late in the race. Attempting to go for a podium spot, Hampshire ultimately finished just behind his teammate in fourth. In Moto 2, he was running inside the top-10 early on before getting caught up in a crash with two other riders, which dropped him to the back of the field. He put his head down and gained nearly 10 spots by the next lap, once again surmounting an impressive comeback throughout the race. With another late-race charge, he took the checkered flag in a solid sixth, finishing the day with 4-6 results for fourth overall.

“The riding was really good today, I felt like I was almost back to normal,”Hampshire said. “My starts were not good and in the first moto, I was beat. The second moto, I ended up going down with a group of guys on the first lap and was buried back in 30th or so. I felt much better on the bike this weekend and had pretty good strength, so I think we’re just going to continue to get better now. We kind of got over that hump with injuries and we’re back having fun and still have a fight in us.”

Jalek Swoll returned to the 250MX lineup after missing the last couple rounds due to injury. Qualifying eighth earlier in the day, Swoll didn’t get off to the best start in Moto 1 and he found himself shuffled back to around 20th for most of the race. He made moves to come through the pack halfway through but he ultimately finished 20th. In Moto 2, he was positioned in 12th after the first lap and he battled around that position before ultimately finishing 14th.

“We’ve for sure had some better days but it is what it is,”Swoll said. “We got through two motos today, so we’ll just build off that coming into Southwick and be ready to drop the hammer. I’m getting tired of just rolling around, so I’m really going to try to send it next weekend and put myself in a position where I feel like I need to be.”

In the 450MX class, fill-in rider Shane McElrath had a good start to the day, qualifying 10th. Unfortunately, he went down with a few other riders in the first turn of Moto 1, which set him back from the rest of the field right away. He did his best to climb through the field, ultimately finishing 14th. In Moto 2, he was displaced to the back of the pack off the start but he put up a good fight to work his way to 16th by the end of the first lap. Still early in the race, he was able to advance to 12th and he made a big push into the final stretch, where he made a last-lap pass to secure 11th just before the checkers.

“I felt like today was the first productive race day I’ve had,” McElrath said. “I actually passed some people, and the results don’t really show what we went through today. It was a good step over the last two weeks being back in Florida and we made some pretty big bike changes, which I think is really starting to come around now. It’s definitely progress. We’ve had a lot of work to do, but we’ve done a lot of work. So, I’m excited to keep it going.”