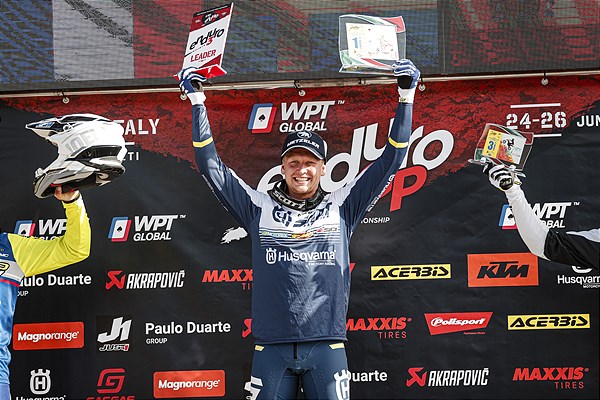 DOUBLE ENDURO3 VICTORY FOR MIKAEL PERSSON AT GP OF ITALY.

It was a dream weekend at the office for Husqvarna Factory Racing’s Mikael Persson who claimed the Enduro3 class win on both days at round three of the FIM EnduroGP World Championship in Italy. Securing maximum points in Carpineti, the Swede took his TE 300 to the top of the championship standings. Jumping into the EnduroGP mix, Billy Bolt joined Persson in Italy and raced his way to a pair of top-10 placings in Enduro3.

Going from strength to strength in 2022, Mikael delivered his best form of the season to date in the hot, dry, and dusty conditions of Carpineti in northern Italy. Impressing all on the opening day of racing, the Swede powered his way to a debut win in Enduro3.

Feeling comfortable in the conditions, Persson topped the first three special tests on Saturday morning to build up an early E3 class lead. Opening up a comfortable advantage over his classmates, he continued to put in a relatively mistake free ride to secure a 30-second margin of victory. The win marked his first visit to the top step of a senior EnduroGP podium.

Clearly motivated by his ride on day one, Persson began day two in confident form on his TE 300. Fast starting, the Swede immediately put himself at the head of the Enduro3 category by winning the first five special tests of the day. A mistake on the penultimate extreme test cost him some time, but in regrouping quickly Mikael held his advantage to claim the win and with it move to the top of the Enduro3 standings.

Dusted off from his fourth place finish in last weekend’s Erzbergrodeo, Billy Bolt made a last minute decision to jump into EnduroGP competition. Arriving with no expectations and having had little time to walk any of the event’s special tests, Billy simply set about enjoying the change of scene. Fastest Enduro3 rider on the Friday Super Test saw him get off to a great start. Going on to set some competitive times, while also topping the penultimate extreme test, Billy ended his day 10th in Enduro3.

Starting day two with more familiarity of the special tests, Billy looked to improve on Sunday. Claiming multiple top four test times, along with topping another extreme test, Billy took his TE 300 to an improved ninth in Enduro3.

The FIM EnduroGP World Championship continues with round four in Portugal on July 1-3.

Mikael Persson:“It’s been a long, dusty and tough weekend, but overall it’s been awesome! Taking my first ever Enduro3 win on Saturday I then managed to win again on Sunday, which was amazing. And now I’m leading the championship, so honestly I can’t really ask for more than that. I’m a little in shock! Each day I just kept pushing as hard as I could without going over my limit. My weak spot was the enduro test and I improved some speed there so that was a good positive. We roll on to Portugal next weekend, so the goal is just to keep this momentum going!”

Billy Bolt:“Honestly, I really enjoyed coming here even though I didn’t have the best preparation. I struggled a lot on Saturday as I arrived late from Erzberg and didn’t walk any tests. In a strange way I appreciate coming to race EnduroGP and getting beat. These guys are so fast at what they do and being put down a peg or two is humbling. All weekend I was riding against myself and just trying to better myself. And I think I did that with each special test.”

Championship Standings (After Round 3)