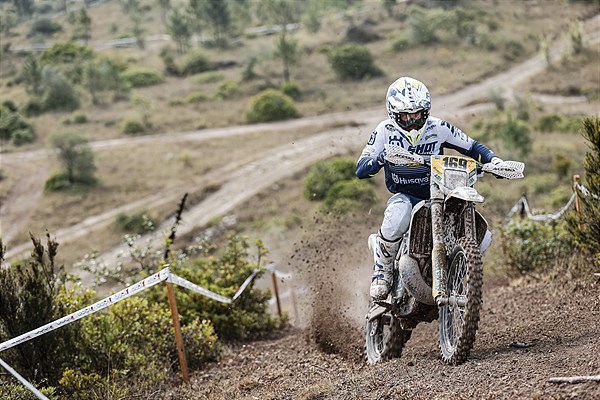 COMPETITIVE SHOWING FOR MIKAEL PERSSON AT ENDUROGP OF PORTUGAL.

Entering the second half of the FIM EnduroGP World Championship as the new Enduro3 class leader, Husqvarna Factory Racing’s Mikael Persson arrived at round four in Portugal aiming for another successful weekend. Achieving a career best double E3 class win last time out in Italy, the spirits of the TE 300 mounted rider were understandably high.

While trying not to focus on being the E3 championship leader, Mikael was eager to keep building on the impressive speed he showed one week previously at the EnduroGP of Italy and consistently put himself in the fight for victory and podium results in Portugal.

Second fastest in Friday’s Super Test, Persson got his participation in round four off to a strong start. Pushing hard throughout Saturday morning he was locked in a fierce battle for the podium. Fastest in the final Cross Test set him up for a good run on the final lap of three, but a mistake on the following Extreme Test hurt his chances and he finished an eventual fourth.

Ready to redeem himself, the Swede again hit the ground running on Sunday morning. Showing impressive consistency, he kept himself in the fight for Enduro3 class victory by rarely dipping outside the top three fastest times. Although giving his best he had to settle for third, missing the win by less than 10 seconds.

The FIM EnduroGP World Championship continues with round four in Slovakia on July 29-31.

Mikael Persson:“It’s been a good weekend in terms of pace. I was close enough both days to be in the fight for the Enduro3 win but lacked a little speed at the end to make it happen. The times were tight and I made a couple of mistakes that I couldn’t afford when it’s close like that. On Saturday my rhythm was solid and I was riding good until a small mishap on the final Extreme Test dropped me to fourth. On Sunday I was in the hunt all day, but just missed that little extra on the final lap. But in the end to be just 10 seconds from winning shows how competitive things are. We’ve a short break now to regroup, charge the batteries, and fight again in Slovakia.”

Results: Round 4 GP of Portugal

Championship Standings (After round 4)