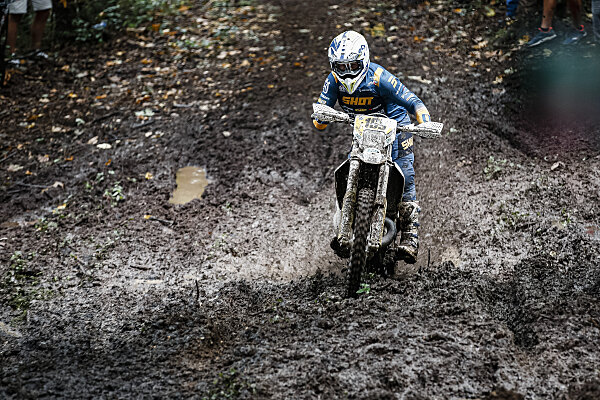 The fifth stop of the FIM Enduro World Championship saw Husqvarna Factory Racing’s Mikael Persson shine in the wet and slippery conditions to take home a strong second-place result each day in Enduro3. Pushing hard in the mud, the Swede also took his TE 300 to two top-eight results in EnduroGP, equalling his best finishes of the season to date.

Back to business after a four-week break between round four in Portugal and five in Gelnica, Slovakia, the weather couldn’t have been any more contrasting for this weekend’s EnduroGP racing. Heat and dust were replaced by lingering rain and mud, while a 15-minute-long enduro test would also shake things up.

Rain on Saturday ensured the special tests were hard to predict early on. After a cautious start, Mikael began to get a feel for the conditions and upped his pace as his confidence grew. Fastest in the final extreme test, the Swede ended his day second in Enduro3, while also matching his season’s best result of seventh overall in EnduroGP.

Eager for more on Sunday, Persson was quick to adapt to the early morning rain and mud. Fastest on the opening cross test, he took the Enduro3 race lead by five seconds. Mistakes on the following enduro test worked against him and he slipped back to second. Chipping away, he clocked the fastest Enduro3 time on the final extreme test to close out the day with another Enduro3 runner-up result.

The FIM EnduroGP World Championship now heads to Hungary for round six on August 5-7.

Mikael Persson:“It’s been a solid weekend finishing second both days in Enduro3. I’m not super happy with the result because I would like to be closer to Brad for the victory, but it’s been a good weekend. Saturday went well. I improved as the conditions dried, and I was able to finish seventh in the overall too. I was hoping for a little more on Sunday, but I lost some time in the morning and had to fight back. Overall it’s been a good challenging weekend and with the GP of Hungary next weekend I hope to get another strong result there.”

Results: Round 5 – GP of Slovakia