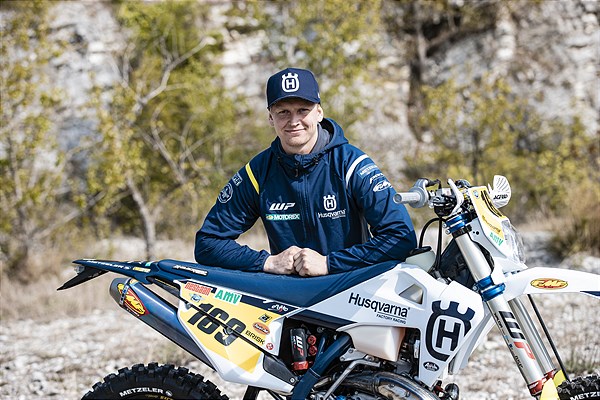 MIKAEL PERSSON ALL-SET TO TAKE ON ROUND ONE OF 2022 ENDUROGP WORLD CHAMPIONSHIP.

Marking the return of the Husqvarna Factory Racing team to the FIM EnduroGP World Championship paddock, Mikael Persson will contest the highly competitive Enduro3 class riding a 2-stroke TE 300 model. The seven-round season commences this weekend, May 6-8, in Spain.

Dominant on the international scene back in 2015 when he won the Enduro Youth Cup, Persson then spent several years away from the world championship paddock where he focused on his own national championships at home in Sweden. Claiming the Swedish title in 2018, 2019, and 2021, Mikael also added wins at the famous Gotland Grand National and Novemberkasen races to his CV.

But it was last season, at the iconic International Six Days Enduro in Italy, where he turned heads once again on the international stage, following an incredible week-long ride. On the pace throughout the event, Persson went on to claim an impressive third-place overall result. Now, having signed to represent Husqvarna Motorcycles as its sole official competitor in the 2022 EnduroGP World Championship, the young Swede is focused on delivering a strong year of racing on his TE 300 as he fights for the E3 crown and the overall EnduroGP honours.

The 2022 FIM EnduroGP World Championship starts in Lalin, Spain on May 6-8 and is followed one-week later with round two from Portugal, on May 13-15. With seven rounds in total, the championship goes on to visit Italy, Slovakia, and Hungary, with the final race taking place at the historic Zschopau venue in Germany on October 14-16.

Mikael Persson:“I’m really looking forward to the weekend and getting the EnduroGP season started. I have been training a lot over the off-season and have taken on some races, but this is where it counts now, at the world championship. For sure, my goal for this year is to be on the podium in the E3 class, and the way I feel right now I’m confident of being able to fight for that result. My speed over the pre-season has been good, but I know it will take a little time to settle in. EnduroGP is so competitive, especially the Enduro3 class, but I know if everything goes well, I have what it takes. The bike has been working really good – obviously we have changed some things over what the extreme guys use. My riding style is quite aggressive, so we’ve worked on smoothing the power and making it more linear. It’s up to me now to get my timing right on all of the different types of terrain we’re going to see this year, and hopefully if everything goes well, the team and I should be in the hunt for the title when the season comes to a close later in the year.”