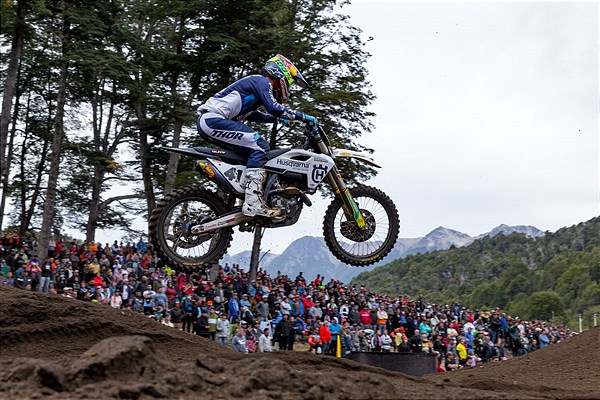 PAULS JONASS RETURNS TO FORM AT MXGP OF PATAGONIA-ARGENTINA.

PAULS JONASS RACES TO FOURTH OVERALL AT THE THIRD STOP OF MXGP.

Just weeks after recovering from surgery, Pauls Jonass has logged a superb showing at the third stop of the 2022 FIM Motocross World Championship. The Standing Construct Husqvarna Factory Racing star raced to 6-5 moto scores to secure fourth overall at the Grand Prix of Patagonia-Argentina, a race that played host to thousands of fans from across South America.

Jonass was brilliant from the moment that the Grand Prix started, as he raced to a convincing pole position in the qualifying heat on Saturday and carried that fine form into the first moto on Sunday. Using the power within his FC 450 to leap out into the early lead in that stint, he led the field for five laps before an untimely mistake dropped him down the order. Jonass battled on and secured sixth in the first premier-class moto.

Another strong start put Jonass in the thick of the fight at the front of the pack in the second moto; he was quick to make some progress and sliced his way into fourth after a handful of laps. Attention turned to the top three at that point, as he desperately tried to edge his way onto the podium. Jonass came up just short in the end – he reached the finish line in fifth. A 6-5 scorecard left him in fourth in the overall classification. Quite the step in the right direction for the former world champion!

Kay de Wolf possessed a lot of raw speed in his first trip across to Villa La Angostura, as he qualified in third and occupied the same position early in the first moto on Sunday. Unfortunately, de Wolf crashed hard just before the halfway point and was unable to continue. De Wolf watched the second moto from the sidelines and will undergo further examinations once he returns to Europe in the coming days.

Nestaan Husqvarna Factory Racing’s Roan van de Moosdijk was not active on race day at the Grand Prix of Patagonia-Argentina, after a fall late in the MX2 qualifying heat on Saturday. Standing Construct Husqvarna Factory Racing’s Brian Bogers was also sidelined with an injury that he sustained on lap one of the MXGP qualifying heat. Both riders will return to Europe to meet with their respective specialists.

The Grand Prix of Portugal, held at the historic circuit of Agueda, is the next appointment for the Husqvarna Factory Racing riders. The fourth round of the 2022 FIM Motocross World Championship will be run on the first weekend in April.

Pauls Jonass: „It has been a tough road, but to win the qualifying race on Saturday was crazy. I was feeling really good! I was feeling great once I got in a flow in the first moto today too, but I made that small mistake and crashed. My arms got pumped up at that point! The bike was working really well today. I am excited to get to work now and keep building for the future.“

Brian Bogers: „I felt really good in free practice yesterday, then time practice was really good as well! I got cross-jumped by another rider in the qualifying heat and hit the ground very hard. We will go to the hospital when we land in Europe, get a scan and go from there.“

Rasmus Jorgensen (Nestaan Husqvarna Factory Racing Team Manager): „It was a difficult weekend for the team. The important thing now is getting the guys home. We will see the specialists later this week and then plan on how to get both riders back to their very best! We will be back.“