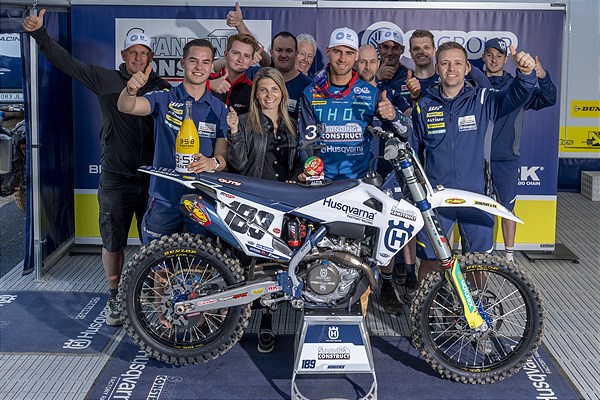 BRIAN BOGERS PUTS HIS FC 450 ON THE PODIUM FOR THE FIRST TIME IN PORTUGAL.

The Grand Prix of Portugal acted as the fourth round of the 2022 FIM Motocross World Championship this past weekend – the iconic orange dirt of Agueda made a very welcome return to the schedule after a two-year absence. Brian Bogers gelled with the jump-laden layout and leapt to his first podium finish in Standing Construct Husqvarna Factory Racing colours.

Bogers was sensational in moto one, despite his lack of seat time since the previous race, and made an impressive push for the win aboard his FC 450. Settling into second after a handful of laps, he shadowed the race leader and was the fastest man on track for much of the race. Bogers eventually crossed the finish line in the runner-up position, just one second behind the eventual winner, and turned his attention to the second moto.

Although a mediocre start in the second moto threatened to derail Bogers‘ bid for a podium, he put his head down and charged throughout the thirty-minute moto. Bogers methodically picked guys off and eventually made his way into fourth by the time that the chequered flag waved, which was more than enough for his first podium finish in the premier class! Third overall was the reward for his hard work in Portugal; the points that he gained helped him climb to eighth in the championship standings too.

The Portuguese stop was another step in the right direction for Pauls Jonass; a consistent scorecard helped him secure another top-five ranking at the end of the weekend. Jonass was involved in an entertaining fight for fourth for much of moto one and eventually placed seventh at the chequered flag. A better start in the second moto helped him secure fifth in the moto and overall classification.

Kay de Wolf was calculated throughout the Grand Prix of Portugal, as he managed each race like a seasoned veteran and extracted the most that he could from the event. De Wolf actually started eighth in moto one and progressed to third by the time that the chequered flag waved. Sixth was his ranking in moto two, following another solid ride, which left him in fourth overall at the event.

The Grand Prix of Trentino, round five of the 2022 FIM Motocross World Championship, beckons now. The picturesque circuit of Pietramurata will host the event on April 09/10.

Brian Bogers: „This is amazing. I am actually speechless! The road here has been so difficult, but we are back! I feel so good with Standing Construct Husqvarna Factory Racing and the speed has been quite good, even at the first couple of rounds. I am just feeling stronger each week and I cannot wait for the rest of the season.“

Pauls Jonass: „There are a lot of things to be happy about on paper – I am not so happy with my riding at the moment though. It is tough to expect more, seeing as I have limited time on the bike! I got good points today with a seventh and a fifth, so we just need to keep putting in the time and carry on building. We are heading in a good direction!“

Kay de Wolf: „I didn’t really feel good at the start of the weekend, but I started having a better feeling today. I actually felt really good! I worked my way up well in the first moto; I was pretty happy with third. I did not have the right feeling in the second moto and struggled to get my rhythm, but I think that it was a good weekend. I am pretty happy about how it ended up going.“