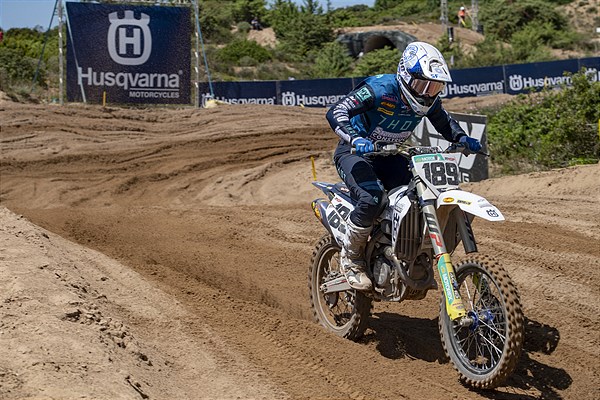 BRIAN BOGERS RACES TO SIXTH OVERALL AT THE MXGP OF SARDEGNA.

Brian Bogers was absolutely phenomenal beneath the beating sun, despite the fact that a fall in the second turn of moto one threatened to hinder him. Bogers remounted and charged from the very back of the pack to fifth at the chequered flag. It was an inspired performance and one that set the tone for moto two. Even more impressive was the fact that he posted similar lap times to the leaders whilst working through traffic.

Although the first moto consumed so much of his energy, Bogers put on another impressive charge in moto two after starting in the lower half of the top ten. ‚189‘ picked his way past various Grand Prix winners to slot into fifth at the chequered flag. 5-5 scores left him in sixth overall, just three measly points from a spot on the Grand Prix podium. Such a consistent ride helped him edge closer to the top six in the championship standings.

Pauls Jonass showed more podium pace aboard his FC 450, as he ran as high as third in moto one before a couple of small errors forced him to settle for ninth place. Eager to bounce back with a bang in the gruelling second moto, he raced to a tenth-place finish whilst trying to find his rhythm in the deep sand. Jonass was eventually classified in tenth overall.

Nestaan Husqvarna Factory Racing rider, Kay de Wolf, was not present at the Grand Prix of Sardegna, as he is recovering from a hand injury that was sustained in a cycling accident on Wednesday.

The 2022 FIM Motocross World Championship will resume at intu Xanadú on May 29. The man-made track that poses a completely different challenge to the riders will host the Grand Prix of Spain, the ninth stop of the current term.

Brian Bogers: „I crashed in the second corner in moto one; I was really happy to go from dead last to fifth. That did take a lot of energy though and I felt that at the beginning of the second moto. Once I warmed up, I felt really strong in that second one too. I think that fifth overall is a good result. I feel really good in the sand – the speed is there for the podium.“

Pauls Jonass: „The starts were a big positive point this weekend. They were good and the first ten minutes of each moto was not so bad, but I struggled a lot after that. I did not get any flow on the track; I rode purely with power and adrenaline at the start of each moto. I am really disappointed, but I will put in the work this week and come back stronger.„