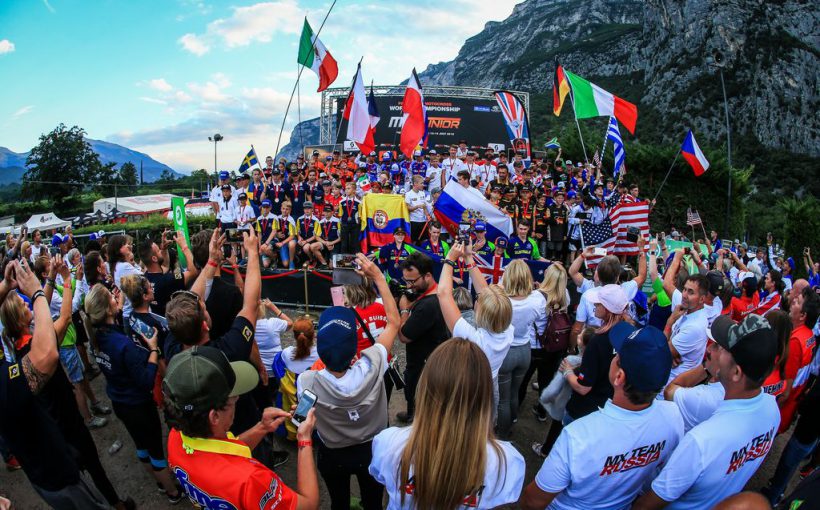 The prestigious 2019 Edition of the Junior Motocross World Championship is set to take place this weekend, July 13th and 14th at the stunning track of Pietramurata, Trentino, home of the MXGP of Trentino.

The Pietramurata track, which lies among the Dolomite mountains is getting ready to witness the best Junior motocross riders in the world.

On Friday evening riders and teams from 32 countries attended the opening ceremony which kicked off the event. The event was held at the Podium area of Pietramurata. The Opening ceremony opened with some images from the 2018 Edition of the Junior Motocross World Championship held in Australia and was followed by a welcome speech from Youthstream Representative Patricia Maskarova, FIM CEO Tony Skillington and President of Motoclub Gianfranco Pasqua.

This edition is bound to be a one to remember, the host team, Team Italy is lining up with 21 riders, while winning Team Australia is participating with 6 riders among an outstanding starting list of 234 riders who go bar-to-bar on Sunday with the hope to be crowned on Italian soil and receive the awesome Scott bike SCALE 990.

The 85cc and 65cc classes are packed of young talents to watch out as possible winners such as: Netherlands’ Lotte Van Drunen and Czech Marek Vitězslav who won 65cc race 1 in 2018.