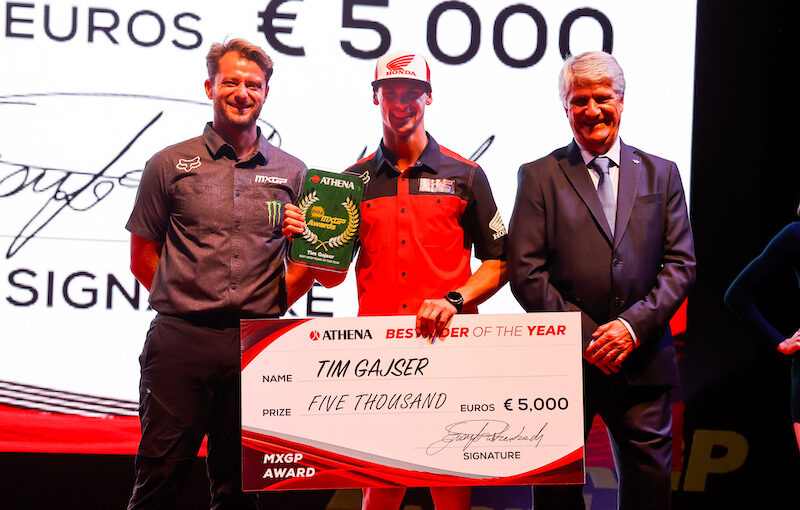 For the second year in a row, MXGP and Athena joined forces to continue the Best Rider of the Year Sponsored by Athena competition!

Throughout the year fans have had the opportunity to vote for the ‘Best Rider of the Year Sponsored by Athena’ in the MXGP category, with the votes tallied at every Grand Prix. A rider of the GP was chosen during each event in 2022 and the rider who received the most points by the end of the season was declared the winner and got to walk away with the ultimate prize and be presented with the special award for ‘Best Rider of the Year Sponsored by Athena’!

Every Grand Prix a dedicated post was shared on MXGP’s official Instagram page under which fans were able to comment who their favourite rider of the weekend was. The comments were then counted and the rider with the most votes was chosen as the best rider of that GP.

At the season finale in Turkiye, Team HRC’s Tim Gajser was voted the Best Rider at the Bitci MXGP of Turkiye after receiving 45.9% of the votes compared to iXS Hostettler MXGP’s Valentin Guillod and Red Bull GasGas Factory Racing’s Jorge Prado who each received 29.4% of the votes!

Gajser was presented with the cheque for winning the competition at the annual MXGP Awards.

Tim Gajser: “It’s really cool for Athena and MXGP to set up a contest like this and I’m really happy to win it! Of course, this would not be possible without all of the fans that have voted for me every GP you know, so really, I must thank them for the support and for this award!”