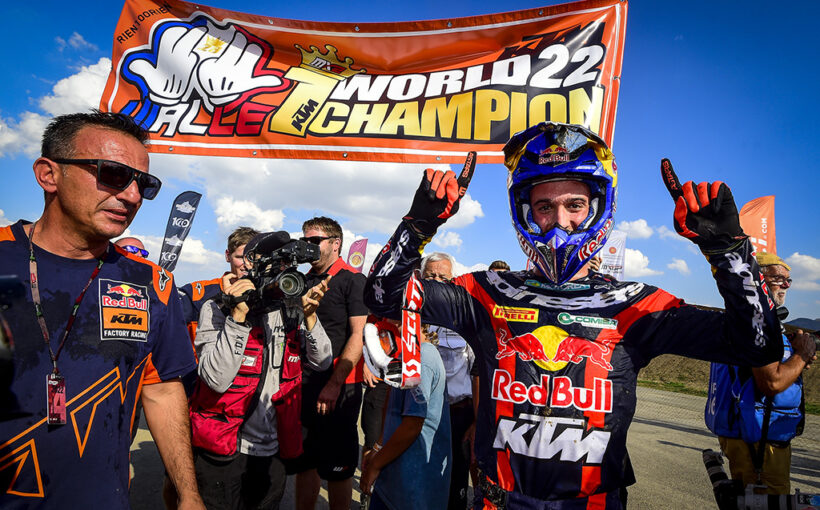 During the 18 rounds of the FIM Motocross World Championship we were treated to some of the closest racings, with the title showdown coming down to just two points as we entered the final Grand Prix of the season, followed by just one point, as Vialle held the advantage, as the pair lined-up for the final gate drop of 2022.

Race two of MX2 was the perfect climax for the 2022 season, with some very close racing between Vialle and Geerts that ended up with both riders going down, but Vialle was able to get going first and make a run for it from his rival.

In the end a perfect 1-1 score was just what Vialle needed to get his hands on his second MX2 world title and end his season with 10 GP victories, 17 race wins, 15 podiums, 6 pole positions and having led a total of 308 laps compared to Geerts’ 154.

The road to number two!

Vialle’s love for bikes came as a result of watching his father, who was a pro rider and winner of 12 GP’s during his racing career. Plus he competed in various events including Supercross, which inspired the young Frenchman to start riding. And at the age of 5, Vialle got his very own bike, entering his first race around the same year.

In 2018, Vialle entered the EMX250 series where he showed promise from the opening round in Red Sand, Spain. The youngster finished the races second and fourth that time around to claim the second spot on the box. At the following round in Portugal he was not so lucky as he only scored three points, though was able to fight back with a race win in Orlyonok. The following few GP’s the Frenchman struggled with consistency, as he battled well within the top three, to finish some races in second and third, though could not put two consistent heats together for a strong overall. Eventually he finished 8th in the Championship standings, before being picked up by Red Bull KTM Factory Racing for the following season.

Vialle then made his MX2 World Championship debut at the MXGP of Argentina in 2019 as part of the factory KTM squad, alongside Jorge Prado. He had a steady first GP to finish well inside the top 10 with a 7-8 result. At the following GP in Great Britain, Vialle continued to surprise as he got himself onto the podium with a strong 3-4 race result and then followed that up with another podium in Trentino.

The following GPs in Lombardia, Portugal, France, Russia and Latvia saw him struggle, before making a comeback in Germany, Indonesia and Asia with a string of 2nd overall finishes. The Frenchman also claimed his first overall that season, as a consistent 2-2 handed him the overall in Sweden, while his teammate celebrated his MX2 title.

In the end, Vialle finished the season 4th in the standings with an overall victory and 7 podiums, which placed him among the favourites for the title in 2020.

Vialle entered the 2020 season with a second overall at the British Grand Prix, before turning things around for the Dutch GP where he took the win and the red plate.

Then we were hit the COVID-19 pandemic, though as things picked back up in Latvia, with what was the first triple-header of the season, Vialle was able to pick up exactly where he left off, to win the first of three GP’s.

Vialle then followed that up with two overall wins in Faenza, as he took his first double race win of the season, during the MXGP of Citta di Faenza. He followed this up with 7 more podiums, which by the end of the season put his tally up to 14.

All season long, Jago Geerts and Vialle traded at who would win the races, along with a couple of other riders who were victorious too, though despite the close battles, Vialle was able to claim the title a round early, during the MXGP of Pietramurata. The day wasn’t easy for the Frenchman who had to start the races from outside the gate, though he was able to get the job done and get that gold plate with a race win in the opening heat. The second race was unlucky for Vialle who had an issue with his bike and could only fight back to 23rd. Despite missing out on the podium, Vialle didn’t let this dampen his mood, as he picked up his championship-winning plate!

There was no doubt that Vialle entered the 2022 season looking to take back what he had lost in 2021, which was the world title after an injury took him out of the fight following his 1-1 victory at the opening round in Orlyonok. The Frenchman then fractured his right hand and was on track to miss the following round, though he did line-up in Matterley Basin but only completed on lap of free practice. He also did not score any points in Maggiora and did not line-up in Oss before making his comeback in Czech Republic where he finished 11th overall. By the following Grand Prix, Vialle was 7th overall, then 4th overall in Latvia, before winning the Turkish doubleheader and then the MXGP of Sardegna, before finishing second in Germany.

The final leg of the season saw Vialle win in Trentino, then place 9th at the MXGP of Pietramurata before ending his season with two podium finishes and a DNF in Garda and Lombardia, while the DNF in Città di Mantova cost him the possibility of a silver medal.

In 2022, it took Vialle a couple of GPs to get into the swing of things before he was able to pick up his first GP victory in Argentina and then added two more in Portugal and Trentino before finishing third and second in Latvia and Maggiora. He then bounce back by dominating the next three GP’s in Sardegna, Spain and France before missing the podium in Germany due to a technical issue which also saw him lose the red plate, but again, the Frenchman came back with a win in Indonesia which saw him take back the red plate for the third time.

As the racing came back to Europe, it seemed like Geerts had the upper hand after winning the next three GP’s in Loket, Lommel and Uddevalla. Even Vialle admitted that he was in a tough position following these three GP’s as doubts began to creep in, but the team got him back on his feet and that clearly showed in Finland – which was the biggest turning point of the year!

Vialle won the next two GP’s, bringing the points gap down to just two points as we entered the Bitci MXGP of Turkiye! Vialle won the first race, which gave him the upper hand heading into the second heat, and after a drama filled race, the Frenchman was able to seal the deal and get his second MX2 world title with a 1-1 scorecard!

Tom Vialle about his last GP that decided the World Title: „It was a great one, I mean I didn’t get the best start in the second race, but I passed Kay and Thibault and was second behind Jago. I felt good actually and then after two laps, I passed Jago on the start straight. Then Jago was pushing a lot, he passed me two times but I passed him back and then I had a little tip over, and I crashed… When I crashed, I thought, this is it, it’s finished, because we were both so fast, but when I saw that Jago crashed with me, I thought „no way“ this is not possible and I managed to get going quickly. It was crazy and I was lucky there a little bit, but that is part of the game. It was a long race eventually; I was watching the clock a lot. I am happy, it was a tough season and to finish like this is so nice”.

Congratulations Tom on your second world title and good luck for the next step in your career!